The beauty of Dakshin Diaries lies within the host and presenter or as we like to call him the 'Singing Chef'. 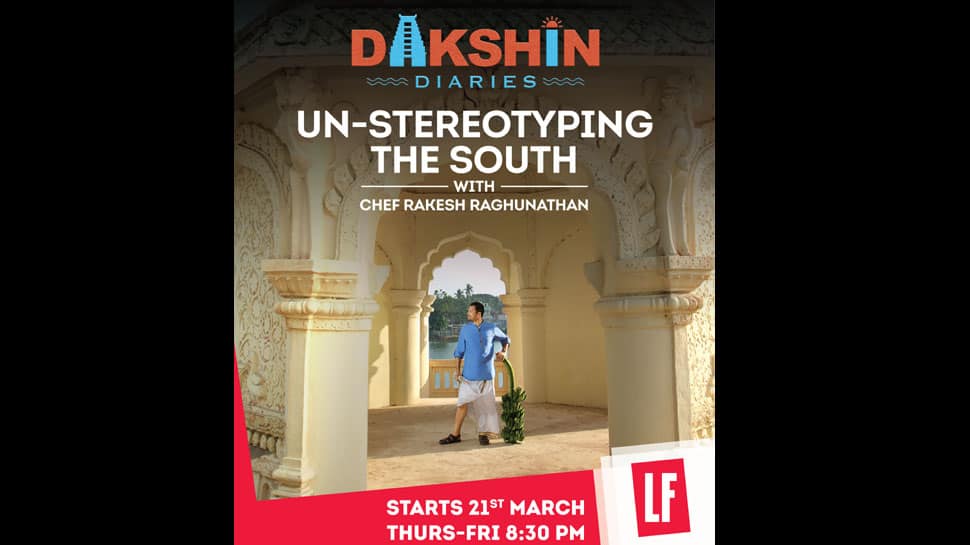 Dakshin Diaries is an experience whose essence breaks the stereotype with which an entire nation views the Southern region of the same country. The show includes avenues that are familiar but when explored reveals a beautifully curated mix of culture, cuisine, travel, music and faith.

Each episode of the _ part special gives fresh insight into the lives of the locals in the different cities of South India and the ancient traditions being passed down for thousands of years that have till now gone undocumented but need a mention in the history of our country.

The beauty of Dakshin Diaries lies within the host and presenter or as we like to call him the 'Singing Chef'. Chef Rakesh Raghunathan brings to Dakshin Diaries what tamarind brings to Puliyogare (tamarind rice) by virtue of just being himself.

What makes something great are the minds behind it and in this case, Chef Rakesh, who was perhaps born with a passion to retain all things South, takes viewers through a journey so rich that it is difficult to envisage it without him.

The entire series explores everything that has as yet rarely been spoken about. It revolves around the one thing that makes it relevant – the people. Be it the people making the temple 'prasadam' and adding their extra faith to it, the people rapping about current issues and trying to make a difference or even the housewives and grandmothers who, for centuries, have cooked with their own recipes with just a pinch of salt or just a hint of turmeric while making the best-cooked dishes in the world.

Dakshin Diaries, as the name suggests, is a record of experiences that revolve around garnering a sense of familiarity to the unknown. Each episode starts with a spiritual passage in a new city, a new temple and a new 'Madapally' (royal temple kitchen). Here the heritage of the city is explored whilst speaking about traditions that uphold the beliefs with which the locals live together.

Each episode then seamlessly transitions into speaking about musicians, art, culture and more. Chef Rakesh meets people from various walks of life each offering something exceptional.

An auto-driver who has given a talk at TEDx and provides free Wi-Fi to all his customers since he realizes the importance it may have especially for his expat riders. A Mylapore Mystical Magical Food Walk with the budding generation to break certain stereotypes. Meeting Dabba Chetty the owner of a traditional medicinal store over a century old selling various herbs, ingredients and medicines some of which one may have never heard of. A visit to 'SoFar' which is an underground music concert community that welcomes music collaborations between the locals and expats and also where Chef Rakesh joins in for a session.

Dakshin Diaries' tagline rightly says 'Dakshin dekho desh samjho!' A conversation on the sports culture of Chennai at the Madras Cricket club - Chepauk with a senior journalist and active member of the club Mr R Mohan reveals a time when India lost a match but the entire stadium did a standing ovation for the Pakistan team's victory lap. From touching the 'Golden Lizard', searching for Saurashtrian weavers in Kanchipuram, trying to get tickets for a Rajnikanth movie, learning the recipe for the bestselling halwa by a North Indian in Kumbakonam, cooking from recipe books left by Serfoji the Maratha ruler, Dakshin Diaries has it all, and more.

Commenting on his experience with the show, Chef Rakesh Raghunathan says, "As someone who has looked at food culturally, historically and enjoyed the journey where I have travelled the length and breadth of the South of India, I have been able to meet interesting people, document recipes, culinary practices, cooking techniques and local legends. I am thrilled about the association with the LF channel, for they continue to set new standards in showcasing food the way it must be shown. I strongly believe that this show will give viewers a nuanced understanding of South India culturally, historically and gastronomically. I am already looking forward to Season 2 of Dakshin Diaries."

Commenting on the show Amit Nair, Business Head, Living Foodz says, "South has been a relatively less explored place for the rest of India. On films and TV and whenever it finds a mention its mostly in cliches. What we have therefore tried to go through this show is to Un-Stereotype the south which also is our key communication peg. The people, culture and tastes combined with distinct traditions make it a unique part of the country and the show manages to capture south in all its glory. I'm very confident that combining the great quality of human stories and the unique milieu, the show will be a success and will look forward to more seasons."

LF and Rakesh's vision has been to try to capture every nuance of each city to showcase the soul of the people currently living there as well as bring to light their traditions that have been passed down for generations.