This Diwali #BurnTheBhedBhaav as &pictures screens Article 15 on October 19

As a part of the campaign, &pictures has curated short films that showcase instances of discrimination and how we can #BurnTheBhedBhaav through inclusiveness. 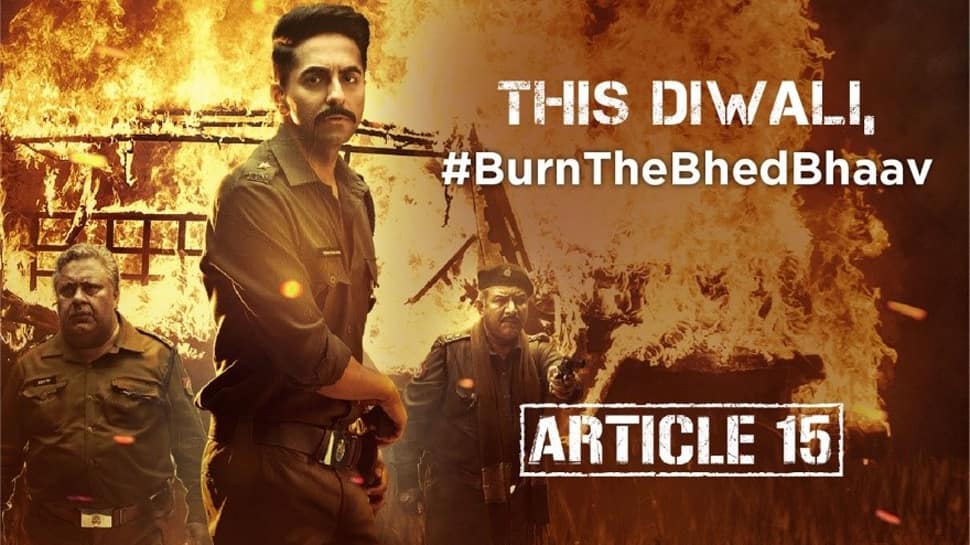 'Kahab to lagi jaaye dhak se, dhak se' (You will be offended if I tell you the truth), this folk song that sets the base of Anubhav Sinha's critically acclaimed Article 15 perfectly describes the jarring contrast between the higher caste and the lower caste.

The movie's narrative pulls the right strings, as it compels the viewer to think about the stigma associated with caste discrimination and the concomitant biases. One of its kind, this critically and commercially acclaimed movie marks the first inning for actor Ayushmann Khurrana as he steps out of his comfort zone to essay the role of an IPS officer.

Along with him, the film stars Isha Talwar, Sayani Gupta, Mohammed Zeeshan Ayyub, Kumud Mishra and Manoj Pahwa in pivotal roles. Article 15 relies heavily on reality and takes instances from the Badaun gangrape and murder case of 2014 and the Una floggings of 2016. &pictures - Naye India Ka Blockbuster Movie Channel, is all set to air the World Television Premiere of Article 15 on Saturday, 19th October at 8 pm.

Ahead of the World Television Premiere of Article 15, &pictures kickstarted a movement called #BurnTheBhedBhaav, focusing on the Article 15 of the Indian Constitution that prohibits discrimination on the grounds of religion, race, caste, sex or place of birth. In our day to day lives, all of us come across instances where discrimination takes place in which either we are the ones initiating it or we may be unknowingly a part of it.

Like, we have separate utensils for our house helps. A landlord thinks twice about the cultural/religious background of a person before renting them the house. Why give old clothes to a servant's son rather than buying them new ones. Do we ever let our kids play or study with the caretakers' kids? Ever wondered why?

Attempting to make a difference, this campaign urges Indians to imbibe the spirit of our constitution and stand against discrimination in all aspects. As a part of the campaign, &pictures has curated short films that showcase instances of discrimination and how we can #BurnTheBhedBhaav through inclusiveness.

These videos break the myth of discrimination is a rural phenomenon rather it is also quite evident in metro cities. As an extension of the activity, &pictures created awareness through communication in trade offices that highlighted 'Article 15' from the Indian constitution. Through this &pictures wants to put forward the point that while reading the constitution is one thing but one should also imbibe the essence of the constitution. With this, we aim to urge people to take a pledge for themselves that will help to bring about a change in today's society.

Ruchir Tiwari, Business Head, Zee Hindi Movies Cluster said, “The Constitution of India has a special provision to safeguard the interest of its citizens in the form of Article 15. Fabulously capturing the essence of this article, director Anubhav Sinha has provoked the audience to look deeper into caste discrimination with Article 15. &pictures - Naye India Ka Blockbuster Movie Channel has always believed in showcasing progressive content that creates a spark of conversations among the viewers. Similarly, with the World Television premiere of Article 15, we want the citizens to ponder over this fact and take a conscious decision this Diwali to burn the sentiment of 'Bhed Bhaav' that we all carry in our subconscious minds.”

Prathyusha Agarwal, CMO, ZEEL said, “At some point in our lives we all have been victims of discrimination, which may have happened unintentionally or intentionally. To spark sensitivity and change, this Diwali, we at &pictures have devised a campaign #BurnTheBhedBhaav to eliminate the problem of casual discrimination that still exists in our nation. To deliver the hard-hitting truth about this social stigma, we have created persuasive thumb stopper videos that will make one question one's own conscience. We have also tied up with our trade partners for brand activations that highlight the true essence of 'Article 15' and encourage them to participate. With this special initiative, &pictures wants to gift the nation a discrimination-free Diwali.”

Director Anubhav Sinha said, "When I was a kid, I realized that people were judged by their surname. I felt it wasn't fair and hence I have used the movie to elucidate a problem and get people to address it. According to me, Article 15 is one article of the Indian Constitution in particular, which is long forgotten, and I wanted everyone to find out about it and talk about it. That's why I kept the shot lingering on what Article 15 says in the film, just before the interval. The initiative that &pictures has undertaken to do away with discrimination is extremely crucial and the need of the hour. I hope it causes a ripple effect."

Ayushmann Khurrana who plays a police officer in the movie said, "Article 15 is a very relevant and important story in today's day and age. Discrimination is a part of society, especially caste-based discrimination. It is not a topic that is spoken about openly and this is the first time a film has boldly spoken about the sensitive social issue of discrimination in mainstream Indian cinema. With it now set to premiere on television for the very first time on &pictures, I hope that films important message reaches as many people as possible across our country."

Set against the backdrop of Laalgaon, the plot of Article 15 is based on the socio-political situation of India and follows the lives of police officers. An honest cop, Ayan Ranjan (Ayushmann Khurrana) is transferred to a remote village in Uttar Pradesh. He takes the onus of investigating a case where two young girls were raped and murdered and hung from a tree. As the story progresses, he stumbles upon many facts and is made aware of the many atrocities that the lower caste face in our country. The rest of the film shows how Ranjan solves the case while trying to understand the ingrained caste system in the village.

So, this Diwali #BurnTheBhedBhaav as &pictures airs the World Television Premiere of Article 15 on 19th October at 8 pm!