Depicting stories of warriors, who at the face of defeat, chose to fight on - &PrivéHD, the premium destination for nuanced cinema, presents 'Shine On' starting October 1, weeknights at 9 PM. 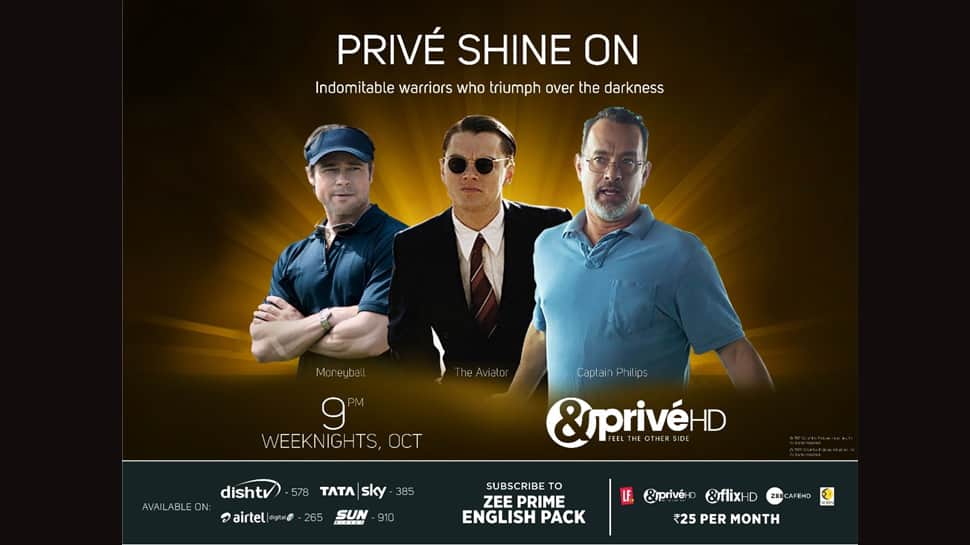 The world may have all kinds of evil but in the end, only the good triumphs above all! This festive season, light-up your spirits, commit to new beginnings and embark on a visual extravaganza as Zee English Cluster promises to enthral viewers with two entertaining properties all through October.

Depicting stories of warriors, who at the face of defeat, chose to fight on - &PrivéHD, the premium destination for nuanced cinema, presents 'Shine On' starting October 1, weeknights at 9 PM.  Also, starting October 1, weeknights at 11 PM, &flix, the destination for the biggest Hollywood hits, is set to showcase a line-up of action-packed entertainers with 'Firecrackers @ 11'.

It truly takes the warriors of light to endure every evil, horror and pain. Celebrate the virtuous and let the light of triumphs guide the way as &PrivéHD brings a line-up of inspiring tales with 'Shine On.' With a never-say-die attitude, witness Captain Richard Philips (Tom Hanks) negotiate Somali pirates to save countless lives on his ship in the film Captain Philips. Discover the story of New Zealander Burt Munro (Sir Anthony Hopkins), a motorcycle enthusiast who spent years rebuilding a 1920 Indian motorcycle in The World's Fastest Indian. The line-up brings many such acclaimed movies like Ali, The Aviator, Queen of Katwe, Million Dollar Arm, Moneyball and The Finest Hours.

At the end of the day, who wouldn't want to settle for the perfect bedtime binge.

With 'Firecrackers @ 11', &flix brings a line-up of iconic and power-packed movies that leave you hooked. Get ready to set your foot-tapping with the street dancers from Step Up 3D, witness the CIA agent showcase the many skills up her sleeve amidst the assassination of the Russian president in Salt and catch the ultimate battle of the robot in the futuristic action-drama Real Steel. The line-up also includes movies from popular franchises such as Transformers, Undisputed, Indiana Jones and many more.

Just as the Festive line-up, &flix always offers the choicest Hollywood movies and the maximum number of television premieres and is available in the Zee Prime English Pack that includes 4 premium channels - &flix, Zee Café, LF and WION at a very attractive price of Rs 15/- per month only. For those who appreciate nuanced cinema, &PrivéHD brings riveting and award-winning films that stimulate the minds and bring alive the other side of cinema with Zee Prime English HD Pack comprising - &PrivéHD, Zee Café HD, &flix HD, LF HD is priced at Rs 25/-.