Zee English Cluster is all set to end your year with a Bang!

&flix will air a specially curated high – octane line up of movies this Christmas, which will inspire viewers to leap forth into the world of action and adventure. 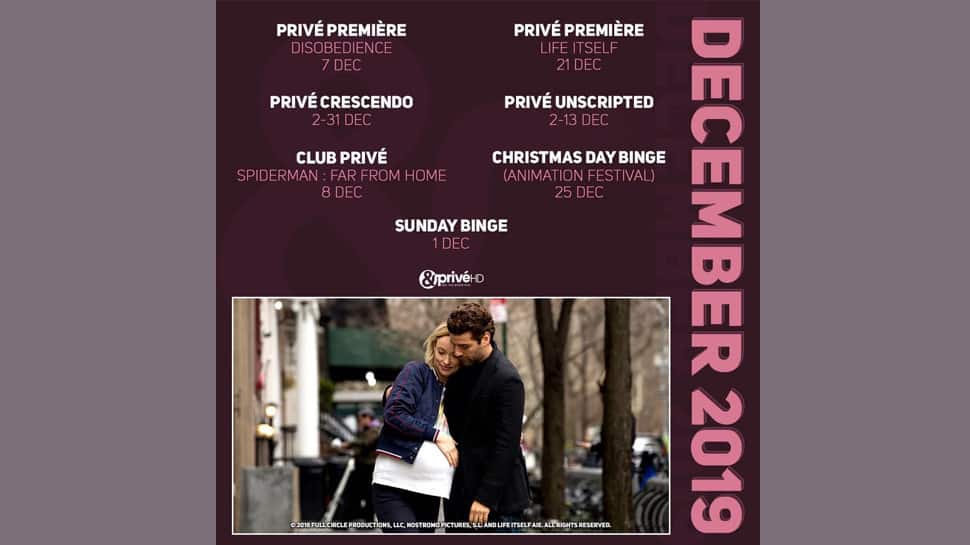 It's that time of the year again, our favourite holidays are upon us. Zee English Cluster is all set to celebrate the festive spirit with an electrifying line up of your most loved television shows and movies 'all month long'.

Right from the World Television Premiere of 'Spider-Man: Far From Home' to 'Santa's Naughty List' and 'Prive Unscripted', or from 'Binge, The Series' to 'Breakfast To Bed Binge', Zee English Cluster has it all. All through December, the Zee Prime English Pack promises to keep viewers entertained.

&flix will air a specially curated high – octane line up of movies this Christmas, which will inspire viewers to leap forth into the world of action and adventure. The season kick-starts with the World Television Premiere of 'Spider-Man Far From Home' to be showcased in different regional languages urging viewers to experience Hollywood like never before!

To re-instate that 'Hollywood is for everyone', the channel is also set to bring 'Flix For All' – a programming block that brings the best of Hollywood, not just in English but also in Hindi, Tamil and Telugu, weekdays at 9 PM. The line-up features popular titles such as Mission: Impossible - Rogue Nation, Bad Boys II, Venom, Brightburn, MIB: International, Spider-Man: Into The Spider-Verse.

That's not all. There's more of adventure and entertainment in store as &flix promises to keep viewers entertained with 'One Last Time in 2019' and 'Santa's Naughty List'. With movies such as Zombieland, Chappie, Iron Man 3, Spider-Man and Michael Jackson's This Is It, viewers are in for an exciting ride all through the festive fervour this month.

For the staunch cinephiles, the premium destination of nuanced cinema, &PrivéHD, brings a promising programming block that features cinema's masterpieces under one library. Brining back Privé Unscripted, viewers of nuanced cinema will get another chance to witness and delve into unedited stories that are raw and real. While the channel makes you feel the other side of cinema, it will also entice you to binge-watch the viewer's choice of critically acclaimed movies, with its new property Binge, The Series.

And the excitement doesn't stop here! Zee Café also has its share of entertainment for those who closely follow the lives of their favourite celebrities with Not Just Supper Stars. A cool celebrity talk show where the viewers get a chance to hang out with the best Bollywood actors as they unveil their personal life secrets and hacks.

Keeping the festive spirit going, the year ending Breakfast to Bed Binge is back with eight days of non-stop entertainment from 8 AM to midnight featuring gripping shows that are sure to keep you on the edge of your couch.

Have a ball this December with Zee English Cluster and witness the best of movies and television shows only on Zee Café, &flix and &PrivéHD