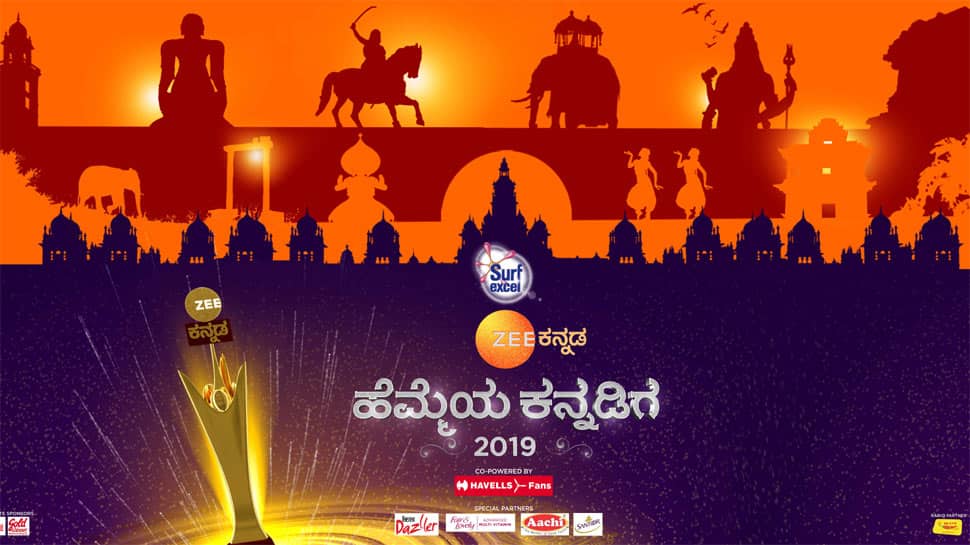 Zee Kannada's Hemmeya Kannadiga 2019 is an effort towards continuing the journey of recognizing and honouring outstanding individuals from all walks of life, who have done Karnataka proud in the year of 2018. This one-of-a-kind award ceremony was held on 23rd March 2019, at Nandi Link Grounds in Bangalore, and will be aired on the 30th and 31st March at 7:00 PM only on Zee Kannada and Zee Kannada HD.

Hemmeya Kannadiga 2019 is bigger and better this year as the channel honours 24 achievers across 24 awards categories, who have done Karnataka proud. The event is aimed at highlighting the cultural heritage of Karnataka, where the platform will be recognizing and honouring the achievers of society, film and small screen industry.

The event's glamourous factory is heightened with the presence of popular sandalwood actors - Ramesh, Yash, Puneeth Rajkumar, Rachita Ram, Priyanka Upendra, and Sumalatha Ambareesh. The evening was filled with the senior stars sharing their cherished memories with Jaleela Ambareesh, along with exciting and colourful performances, songs, dances and super performances by television and film stars.

The star-studded event brought together some of the noblest and admirable individuals under one roof from Karnataka who have contributed to the society, and to the entertainment industry. The enthralling ceremony brought together the most eminent individuals to the sensational 'Red Carpet', where they paraded through traditional music and visited the testament by the popular Auto Shivakumar, with the feeling of nostalgia and pride.

Capsicum Kamalamma, who used the facilities given by Government for agriculture and is recognized at State and National level was honoured with the Proud Farmer award. Social Reformer, Dharmadhikari of Dharmasthala Veerendra Heggade was awarded the Proud lifetime achiever. V Nagendra Prasad, who created a new wave in the Kannada cinema industry with his writing was awarded, Proud lyricist. Vijay Prakash, the singer who sung best songs in the year 2018-19 was honoured with the proud voice awards. Arjun Janya, who composed the best music in 2018-19 was honoured as Proud Musician. Dhananjaya, who acted in Tagaru cinema as Dolly was honoured as Proud supporting role.

Ambareesh who started his career as Jaleela in Nagarahavu and showed his mettle with Ambi Ning Vayassayto, is no more with us. Rebel Star Ambareesh was awarded with Proud Honorary award. The person who created his own style in acting, politics and in personal life, was well-respected by the people, therefore, was saluted by everybody present. KGF by Hombale films was dubbed in five languages that increased the visibility of the Kannada film industry, was awarded Proud Film.