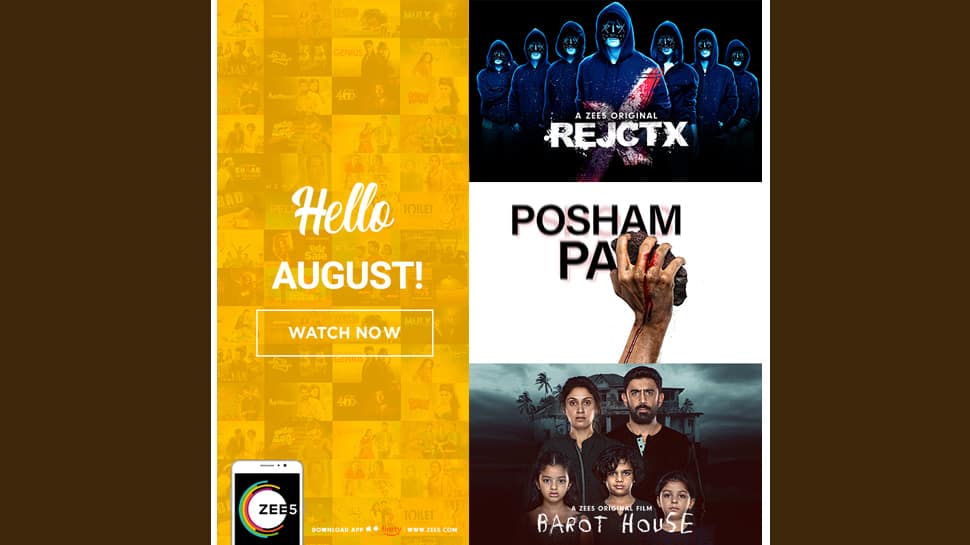 ZEE5 Global's all set to roll out another blockbuster month with a slew of all-new Originals, new episodes and films for its audiences across 190+ markets this August.

From Director Bugs Bhargava comes Barot House, a dark suspense drama that narrates the story of a happy family whose lives are turned upside down by the brutal murder of their daughter. Starring Amit Sadh and Manjari Fadnis, this ZEE5 Original film globally premieres on the platform on 7th August.

Bringing to life the story of India's first female death row inmates is another ZEE5 Original film Posham Pa. Starring Mahie Gill, Sayani Gupta and Ragini Khanna, this psychological thriller follows the horrifying true story of a mother and her daughters who were sentenced to death for a heinous crime. This Original globally premieres on 21st August.

Also rolling out in August are all-new episodes of ZEE5's very first musical web-series, RejctX, which had a much-awaited premiere last month. Starring Kubbra Sait and Sumeet Vyas in the lead, the series has new episodes being released every Thursday.

Adding to this August mix are a set of special collections to celebrate India's Independence Day and Raksha Bandhan, which include patriotic films like Uri, Parmanu and Gandhi my father, as well as superhits that celebrate the special sibling bond with films like Josh, Iqbal and Hum Saath Saath.

Commenting on this, Archana Anand, Chief Business Officer, ZEE5 Global says, “We have a huge library of compelling multi-genre content to cater to our audiences across regions and we're constantly adding on to this with newer stories across genres. This month too we are premiering a range of shows across genres from psychological thrillers to suspense dramas and more, to give our audiences access to a vast spread of entertainment.”

With a strong line-up for August, ZEE5 has also announced its next blockbuster show Bhram, a psychological thriller starring Kalki Koechlin, that is currently being shot in Shimla. The eight-episode series written by K Hari Kumar and directed by Sangeeth Sivan is a story of a novelist, played by Kalki, who suffers from post-traumatic stress disorder (PTSD), and her journey through the many eccentric emotions she experiences while pursuing a story. The series boasts an eclectic cast comprising Bhumika Chawla, Sanjay Suri, Eijaz Khan and Omkar Kapoor among others, and is slated to premiere in September.

Kumkum Bhagya 31 July 2019 episode preview: Will Rhea save herself from Abhi’s anger?