ZEE5 has a wide repertoire of visual content including movies as well as web series. 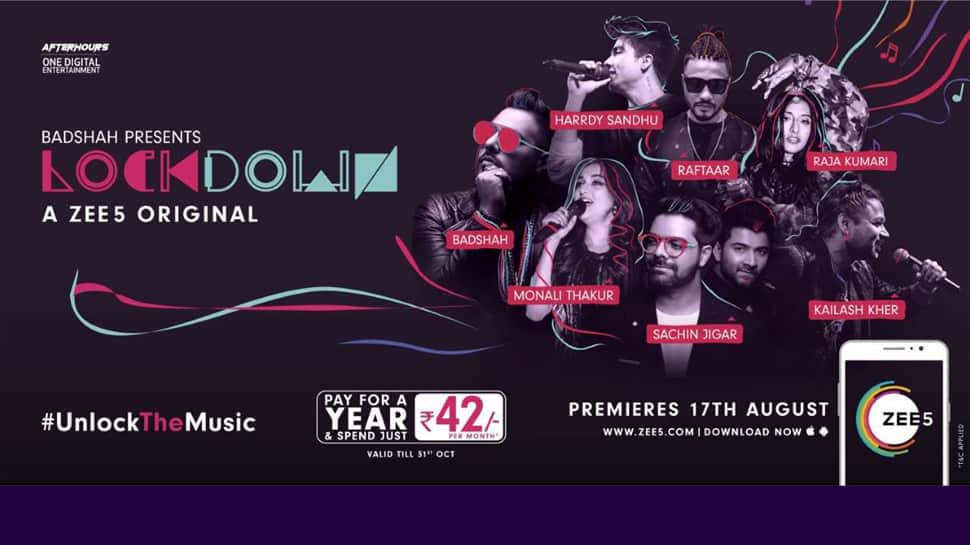 New Delhi: India's largest and most comprehensive digital entertainment platform for language content, on Friday launched 'Lockdown' – a path-breaking concept in collaboration with renowned rapper and composer Badshah. The show marks Badshah’s debut as a producer under his banner Afterhours, co-produced by One Digital Entertainment, for ZEE5.

Each duo is locked together in one location for 24 hours to recreate two songs, record them and shoot music videos. Lockdown has been shot across scenic locations in India and promises a rendezvous with your favourite musicians – one that has never been seen before.

Manish Aggarwal, Business Head, ZEE5 India said, “After creating engaging original content in terms of films and shows, music was a natural progression for us. We couldn’t think of anybody better to partner in this endeavour than the hugely popular musician Badshah. Lockdown is our maiden foray into music and will be unlike anything the Indian audiences have seen. The show promises to keep audiences hooked to the amazing tunes created by some of the most talented artists. The format of the show is a winner, and we are sure the viewers will enjoy it like our past offerings.”

Badshah, who turns producer with the show said, “Lockdown is a project that is very close to my heart since it’s the first offering from my production house Afterhours. The format is quite unique and fun because we have got several well-known artists to collaborate with each other and some of them had never even met before! But all of them have been quite enthusiastic and the result that has erupted out of the oneness of these Bollywood and Digital sensations is something that the audience is going to love. To be aired on ZEE5, the show is sure to be a hand’s down winner for the music aficionados.”

Gurpreet Singh, Co-Founder, One Digital Entertainment said, “Observing the current stage of music evolution and craze, Lockdown’s format will definitely stick well with enthusiasts from almost all genres. We are honoured to be a part of Badshah and ZEE5’s vision that is sure to start a new refreshing trend in the music and entertainment industry.”

ZEE5 has a wide repertoire of visual content including movies as well as web series under multiple genres such as comedy, drama, thrillers, horror, biopics and so on.

Download the App using the special offer - 2 months’ subscription @99/- only or @499 for a year – special offer until 15th August. ZEE5 has a rich bouquet of original content in six regional languages along with the latest blockbuster movies. The platform will launch 20 originals in 2018 and will have 90+ shows by the end of March 2019.

Pricing: Freemium pricing model with both free and paid premium content (including Originals) to cater to a mix of audiences. Viewers who subscribe to the ZEE5 subscription pack will get access to the entire library of content at a special offer price of INR 99 for two months and INR 499 for a year – special offer until 15th August.

Bigg Boss 12: Salman Khan's show will be full of twists and turns—Deets inside