Ankita Raina continued her top form with a fluent win after Karman Kaur Thandi's erratic victory as India took an unassailable 2-0 lead over Hong Kong in the Fed Cup, here on Friday. 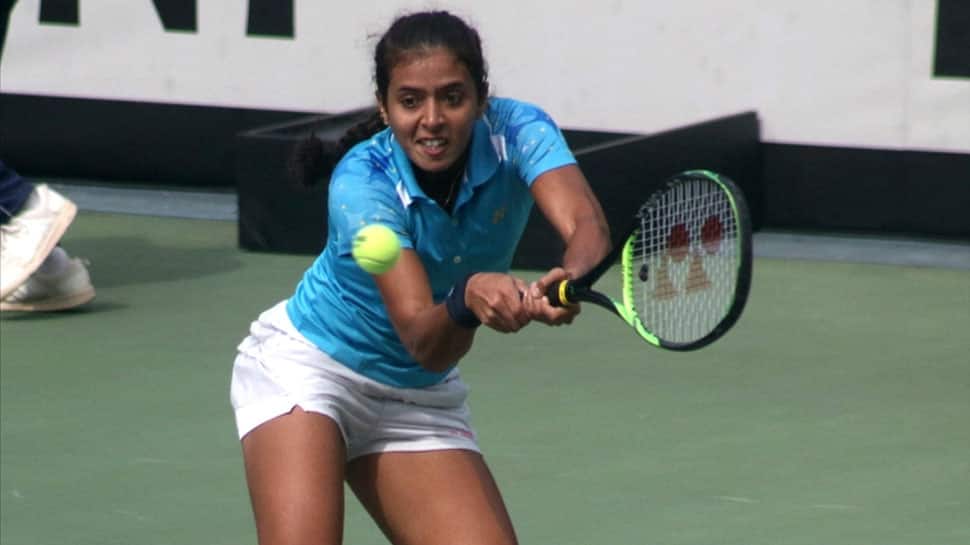 Karman struggled to contain her unforced errors but prevailed 6-3, 6-4 win over Eudice Chong to give India a 1-0 lead in the Asia/Oceania Group I tie.

Up against a lower-ranked opponent, placed a humble 761 in the WTA list, Karman snapped a four-match losing streak. The last time she won a Fed Cup match was exactly a year back when she travelled to Astana, Kazakhstan.

Ankita, who has impressed with her inspirational performance against higher-ranked players, then overcame Ling Zhang 6-3, 6-2 to give India their first win of the 2018 season.

The doubles match has been rendered inconsequential but will still be played.

On Saturday, India, third-placed in Pool A, will play the fourth-placed team from Pool B in the relegation playoff.

Despite playing some energy-sapping matches in the last two days, Ankita did not let the intensity drop as she kept grinding from the baseline and found some delightful winners.

She did not lose any point on her serve in the first two games and after breaking Zhang in the fourth game, Ankita staved off four break-points in the fifth to take a 4-1 lead.

The break stayed with her as she closed the set in the ninth.

Ankita hit a service return winner to earn two break-points and converted the first when Zhang hit a backhand wide to take an early in the second set.

She had as many as nine breakpoints to open up a huge lead but a dogged Zhang saved all of them. Ankita created opportunities with several winners at deuce points but Zhang came out with deep and angled returns to deny Ankita.

Zhang changed tactics and started feeding loop balls, taking the pace off the ball and letting it bounce high but Ankita countered the strategy nicely and broke her in the seventh game for a 5-2 lead.

Serving for the match, Ankita faced two break-points but saved both to seal the tie for India.

Earlier, Karman, who played much better yesterday against a high-quality opponent, remained erratic throughout.

Break of serve was the order of the match as both players struggled to hold. Karman lost her serve thrice and Chong, who flew from the US to compete for the country, dropped serve five times in the contest.

Aditya Sachdeva, who has coached Karman from her childhood but has not worked consistently since she was training away, agreed that Karman needs to work on the mental part of her game.

"She needs to play bigger points better. At 15-30 or 15- 40 when you can hit the opponent psychologically she gives away free points," Sachdeva, who has again started working with Karman, told PTI.

"But the good thing is she is quick learner and implements (learnings) in a match. We worked on her serve yesterday and it showed in the match. Ankita Bhambri also worked and that has helped her in today's match," he said.

Fed Cup: India lose to Kazakhstan, out of contention for World Group playoffs