Zverev has emerged as one of the brightest stars in men's tennis after victories over Roger Federer and Novak Djokovic en route to an ATP Finals triumph in November, but the 21-year-old German remains unable to find his best form at Grand Slams. 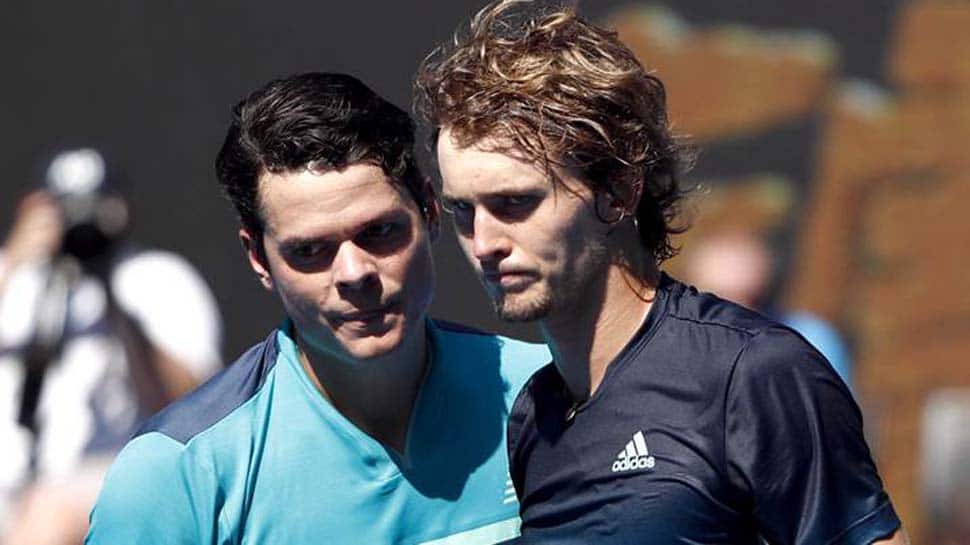 German prospect Alexander Zverev only managed to beat his racket on Monday as the highly-regarded fourth seed was dumped out of the Australian Open by big-serving Canadian Milos Raonic in a surprisingly one-sided 6-1, 6-1, 7-6(5) fourth round triumph.

Zverev has emerged as one of the brightest stars in men's tennis after victories over Roger Federer and Novak Djokovic en route to an ATP Finals triumph in November, but the 21-year-old German remains unable to find his best form at Grand Slams.

Following 20-year-old Greek Stefanos Tsitsipas' win over Federer on Sunday, the towering, shaggy-haired Zverev needed to prove that he also has the temperament to match his talent and help lead the next generation against the established order.

"This is one of many tournaments. You can't really compete every single week saying you made semis there or quarters there, beat that," Zverev, who has yet to progress beyond the quarter-finals at a Grand Slam, told reporters.

"No, actually I want to be the best, but, yeah, not this week. Right now I'm not happy, but I'm not depressed either. It's fine. It's a tennis match. I have learned to take tennis matches as tennis matches and not the end of the world," he added.

Zverev started well against 16th seed Raonic with a break in the first game, but he was then broken six times in the first two sets before the Canadian converted his fourth match point in a tight third set to seal the contest in less than two hours.

Injury-prone Raonic, who climbed to a career-high ranking of third in 2016 when he reached the Wimbledon final, believes he was rediscovering his best form.

"I had a really good off-season. I put in some of the best hours in a long period of time, maybe if ever. I'm not the kind of guy that needs a lot of matches." the 28-year-old said.

"For me, it's about being sharp, moving well, and being efficient with my serve and this kind of thing. If I can get those kind of things, my serve always buys me time in matches and in tournaments to sort of figure things out. It can keep me alive for a while."

For the most part, Zverev was unable to figure anything out, and after serving his fifth double-fault to cough up a break in the second set, he hammered his racket repeatedly into the ground to pick up a code violation warning from the umpire.

While the German did not go to the extent of smashing four rackets into pieces as Marcos Baghdatis did during his three-set loss at Melbourne Park to Stan Wawrinka in 2012, it did feel like a deja vu moment for Zverev.

Last year, he took out his frustration in a similar manner during his Australian Open third round loss to South Korean Chung Hyeon.

"It made me feel better, I was very angry, so I let my anger out," Zverev said, recalling the incident in Monday's match when he smashed his racket nine times while also startling a ball boy.

Zverev put up a better fight in the third set behind an improved serve and fewer unforced errors, as the German saved the second match point he faced by winning a 29-shot rally but it ultimately proved too little, too late.

Raonic advances to face either Croatian 11th seed Borna Coric or Frenchman Lucas Pouille, who is seeded 28th, for a place in the semi-finals.