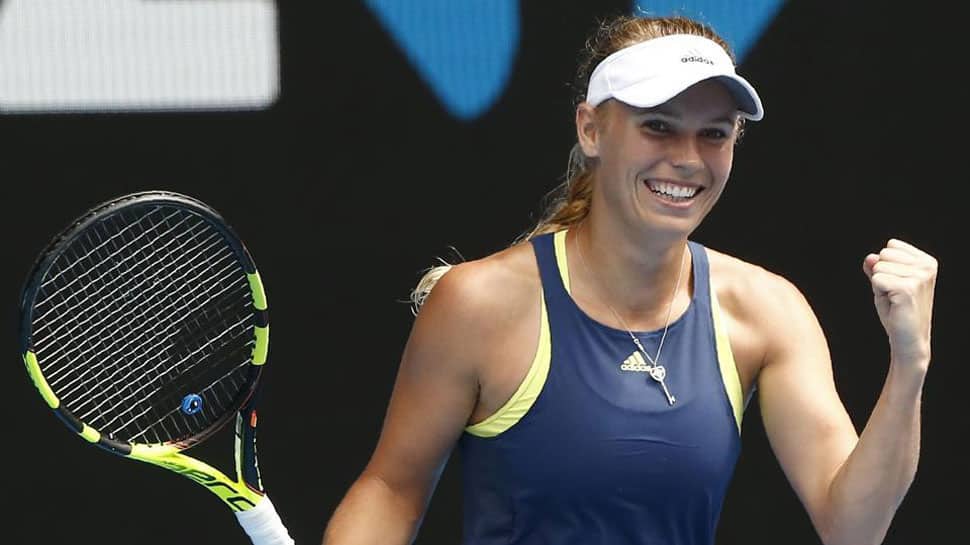 On an overcast and muggy day at Melbourne Park, the world number two Dane turned on the style to take another step towards a maiden Grand Slam title.

The assured Wozniacki, a semi-finalist in 2011 who has never quite lived up to the hype in the majors, annihilated 19th-seeded Magdalena Rybarikova 6-3, 6-0 on Rod Laver Arena in her most impressive performance to date.

"She really mixes up the pace, I just tried to calm down, get my returns in and wait for the opportunities to attack," she said after crushing the Slovak, who made the semi-finals at Wimbledon last year.

"I think you can tell my confidence is pretty good at the moment."

Her easy passage sets up a last-eight clash with gritty Spaniard Carla Suarez Navarro, who battled back from a set and 4-1 down to shatter the hopes of 32nd seed Anett Kontaviet.

The Estonian had been bubbling with confidence after dispatching French Open champion Jelena Ostapenko in the third round, but nerves got the better of her.

The Spaniard, who has made the quarter-finals in Melbourne twice before, most recently in 2016, credited her fightback with a conscious decision to be more aggressive.

"I was thinking that I was playing good, but not too aggressive. I want to play like this, but sometimes you cannot," said Suarez Navarro, one of the few who still use a one-handed backhand.

Looking ahead to Wozniacki, she added: "I know how she plays. I know how tough she is. It will be a really interesting match."

The 37th ranked Elise Mertens also made the last eight, becoming the first Belgian since Kim Clijsters in 2012 to get so far in Australia.

She posted a straight-sets win over Croat Petra Martic 7-6 (7/4), 7-5 and will now play either fourth seed Elina Svitolina or Czech qualifier Denisa Allertova.

Mertens is a form player after winning the lead-up Hobart International, while Svitolina was the champion in Brisbane.

"It was a big battle and I am really relieved that I played such a great tiebreaker at the end," said Cilic.

Top seed said Nadal is gunning to make the last eight for the 10th time.

Ordinarily, he would have top billing on Rod Laver in the evening, but not with local star Nick Kyrgios in action.

Kyrgios has an edge - he beat the Bulgarian on his way to winning the Brisbane International earlier this month.

The winner will play either Briton Kyle Edmund or Italian veteran Andreas Seppi.