A fired-up Ankita Raina produced a stunning performance under pressure to shock world number 120, Lin Zhu, but that was not enough as India lost the Fed Cup tie against China 1-2 on the opening day of the Asia/Oceania Group I competition in New Delhi. 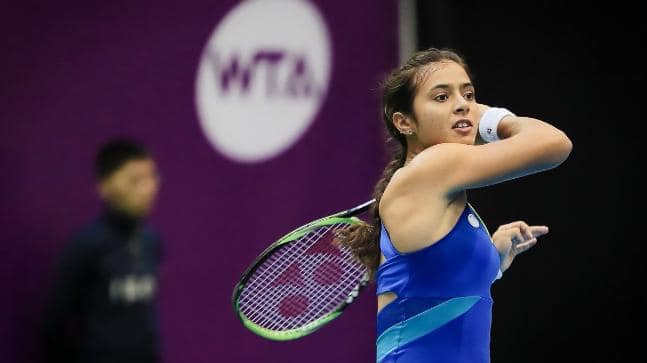 New Delhi: A fired-up Ankita Raina produced a stunning performance under pressure to shock world number 120, Lin Zhu, but that was not enough as India lost the Fed Cup tie against China 1-2 on the opening day of the Asia/Oceania Group I competition in New Delhi.

Playing with a lot of passion and energy, the 253rd- ranked Ankita came out with relentless hitting to catch Lin by surprise and beat her higher-ranked rival 6-3, 6-2 on the centre court at the R K Khanna Tennis stadium.

Later, Ankita came back to play the decisive doubles with Prarthana Thombare, but the Indian pair was no match to the combo of Wang and Zhaoxuan Yang, world number 31 in doubles, as it went down 2-6, 6-7(1) to lose the tie.

The Indians were not sharp enough, lacked coordination and missed several chances.

India next play formidable Kazakhstan, who blanked Hong Kong 3-0, in a must-win tie on Thursday.

The winners of the two Pools will clash against each other to qualify for the World Group Play-off.

It was Ankita’s first win over Lin in fourth attempt as she lost twice to her on the Tour and once in the Fed Cup.

Ankita never took her foot off the pedal as she kept throwing the balls back to Lin, who struggled to cope with the Indian’s consistent returns.

Lin pounced on the serve of the Indian initially and consistently hit on her backhand but Ankita was ready to return the compliment.

After playing four deuce points in the fourth game, Lin hit a slightly wide forehand to hand Ankita her first breakpoint, but the Chinese managed to save that.

Lin again made an error with her forehand and this time Ankita did not miss out as she attacked the second serve of Lin to make an angled un-returnable backhand to break her opponent.

Ankita was swift with her movement and had controlled her groundstrokes to twice save break chances in the following service game to take a commanding 5-2 lead.

Lin did put some pressure on the Indian but Ankita kept the lead with her and closed out the set in her favour in the ninth game.

Ankita kept up the tempo and broke Lin in the first game of the second set when the Chinese faltered with her backhand at 30-40.

The Indian lost her serve for the first time in the match immediately after getting the break but did not allow the Chinese to disturb the momentum by breaking her again in the fifth.

Ankita showed she was in complete control as she executed a disguised drop shot at 15-15 to create an opportunity and executed it nicely.

Earlier, in the first match, the gulf between the players was evident with Wang striking the ball with authority while Karman’s game was littered with errors.

The Chinese team arrived only yesterday morning but Wang still managed to adjust to the bounce of the centre court and the conditions.

Wang is coming to the Fed cup after a semifinal finish at the WTA Taipei Open, where she lost the last-four match to world number 45 Timea Babos after beating Eugeni Bouchard.

It was the second meeting between Karman and Wang, who now leads the head-to-head 2-0, having won the first match during the Tianjin ITF event last year.

Wang stamped her superiority from the beginning as she broke Karman in the very first game of the match.

Karman tried too hard and even changed the tactics by approaching the net but Wang was up to the task as the Chinese found easy passing winners and forcing the Indian to retreat.

Karman, coached by Aditya Sachdeva, lacked variety and tactics to tackle her wily opponent, who has played Grand Slam qualifiers.

Karman had two chances to break her opponent — in the second game of the opening set and sixth of second — but she could not.

Karman’s serve was good only in patches as she served five double faults. In the few rallies also it was the Chinese who handled the points well.

Karman’s unending unforced errors never let her come back in the match and one such long backhand ended her struggle on the court.