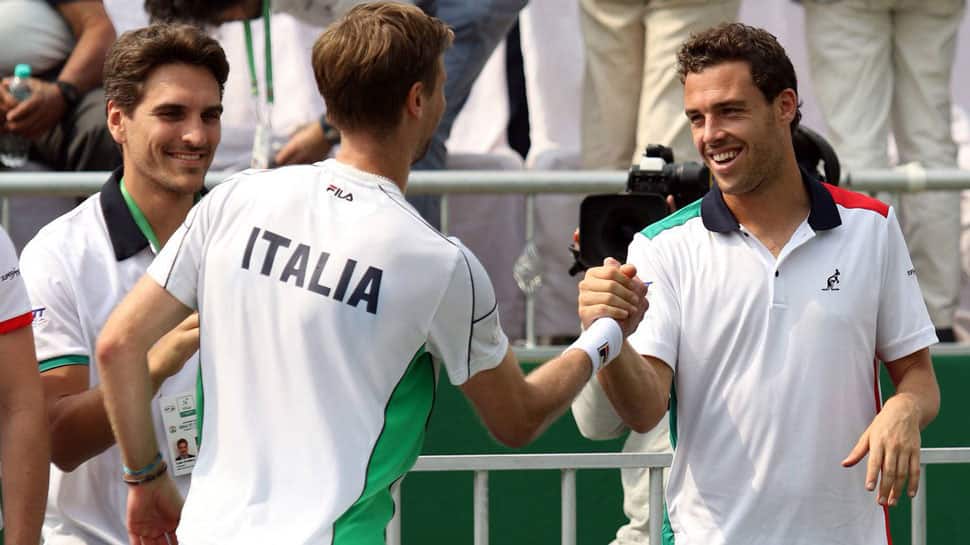 India lived up to their reputation in the doubles but that was not enough as Italy secured a 3-1 triumph after winning the reverse singles on Saturday to storm into the first-ever Davis Cup World finals.

However, it only delayed world number 10 Italy's march into the finals as world number 37 Andreas Seppi outclassed top-ranked Indian Prajnesh Gunneswaran 6-1 6-4 in 62 minutes in the first reverse singles to render the fifth rubber unnecessary at the Calcutta South Club.

On a career high ranking of 102, Prajnesh had no chance in the first set and though the left-hander gave a better account of himself in the second set, a total of 40 unforced errors dashed his hopes.

Terming it frustrating, Indian non-playing captain Mahesh Bhupathi said: "All of us had belief but we needed to win a point yesterday. It was a monumental task to win back from 0-2 down."

Italy boast of three players inside the top-60 but no Indian features in the world's top 100 and Bhupathi said that the country needed to do a reality check after the loss.

"We need to come into the real world. Once the Madrid list (of 12 nations) is out, I want you to see if they have any player outside the top-100. Of course, we were dying to go to Madrid. But you can't expect miracles," he said.

"It's been great to work with them. Prajnesh has made all the way up to 102 from 300 in two years. There's a lot of potential," Bhupathi, whose term is also coming to an end with the Davis Cup tie, said.

Italy thus extended their head-to-head record against India to 5-1 with the hosts enjoying an upper hand in the same grass courts in 1985.

However, India's gamble on grass flopped this time with 1976 champions Italy emerging as one of the 12 qualifiers to join 2018 champions Croatia, runners-up France, and semi-finalists Spain and USA in the Finals to be held in Madrid in November.

Great Britain and Argentina have been given wild cards in the 18-team Finals which will feature six groups of three teams each, with the six group winners and two best-performing group runners-up competing in the quarter-finals, semi-finals and the summit clash on November 24.