Hingis announced on Thursday that she was hanging up her racket for a third and final time following this week's event, bringing an end to an illustrious career that has garnered 25 grand slam wins -- five in singles, 20 in doubles. 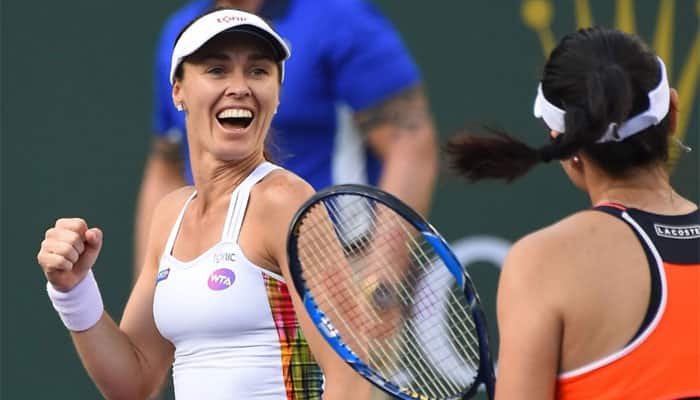 Singapore: Martina Hingis ended her career on a losing note when the retiring Swiss great and her partner Chan Yung-jan of Taiwan were beaten 6-4 7-6(5) by Timea Babos and Andrea Hlavackova in a WTA Finals doubles semi-final on Saturday.

Hingis announced on Thursday that she was hanging up her racket for a third and final time following this week's event, bringing an end to an illustrious career that has garnered 25 grand slam wins -- five in singles, 20 in doubles.

The top seeds had hoped to send Hingis off with a fourth WTA Finals doubles crown after two triumphs with Anna Kournikova and one with Sania Mirza, but Hungary's Babos and Czech Hlavackova proved too strong at the Singapore Indoor Stadium.

The Hungarian-Czech duo edged a high-quality opening set but were given an almighty scare when Babos tumbled to the ground at 5-5 in the second set while trailing 30-0, twisting her left ankle and requiring a lengthy medical break for treatment.

Both pairs remained strong on serve to send the contest into a tiebreak and the top seeds were beaten when Hingis sent a backhand long on the first match point to end both her and Chan`s interest in the competition and her own career.

"For me to play on a court like this and against an opponent like this makes me emotional... for me and her," Babos said in a courtside interview.

"It's an incredible moment for her, after all, she has achieved and to play against her is just amazing to be part of her history. Hopefully, just once in my life, I can achieve the kind of things she did."

Despite the defeat, Hingis will go out on at least one high after the WTA confirmed on Friday that the Swiss had secured the year-end number one ranking in women`s doubles alongside Chan after the pair won nine titles in 2017, including the U.S. Open.