Before the tournament, top seed Djokovic declared the three should be favourites to win the Slams, and Federer agreed when asked after his Evans match. 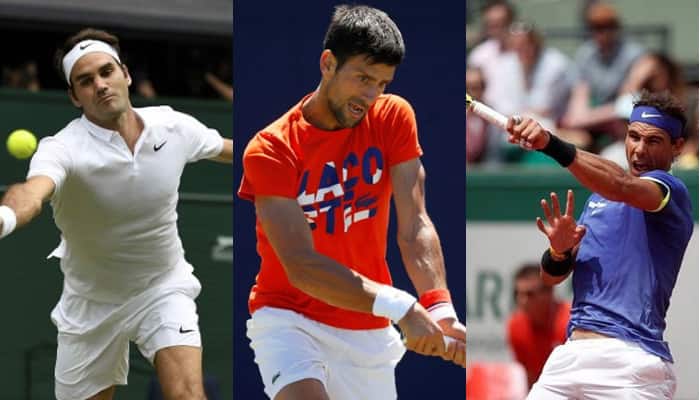 Roger Federer has given cold comfort to the next generation of men`s players hoping for Grand Slam glory, saying he, Novak Djokovic and Rafa Nadal are still deserving favourites to claim the game`s biggest trophies.

The top three seeds at Melbourne Park raffled all four of the majors between them last year, with Federer winning his sixth Australian Open, Nadal claiming his 11th French Open and world number one Djokovic sweeping Wimbledon and the U.S. Open.

The Swiss master is bidding for his 21st Grand Slam crown and a hat-trick of Melbourne titles this year, and he sailed into the third round on Wednesday with a straight sets win over British qualifier Dan Evans.

Before the tournament, top seed Djokovic declared the three should be favourites to win the Slams, and Federer agreed when asked after his Evans match.

"Yes, I guess so," the third seed told reporters.

"I mean, look, I think we know how to win Slams, Novak, Rafa, myself. I mean, Rafa has to be the number one favourite, I don`t care how he feels, before the French.

"Novak is always a favourite on the hard courts, basically any court if he`s feeling 100 percent, if he plays like last year.

"Maybe just because of my amount of titles I have at Wimbledon and other places, maybe also have to put me in the mix every time, as well."

The last time a player not named Federer, Djokovic or Nadal won a Grand Slam was at the 2016 U.S. Open where Swiss Stan Wawrinka claimed his third Grand Slam trophy.

Pundits have decried the younger generation`s failure to break into the Grand Slam cartel enjoyed by the old guard but have some tipped change at the top this year.

The 21-year-old Alexander Zverev, who claimed the ATP Tour Finals and is seeded fourth in Melbourne, is often touted as the player most likely to upset the apple cart but has only a solitary Grand Slam quarter-final to his name, at Roland Garros last year.

"There are other guys, no doubt about it," said 37-year-old Federer, who will play American Taylor Fritz in the third round.

"I think also with Sascha (Zverev) holding the World Tour Finals, I think it`s fair to say that even though he has not ripped through those Slams yet, he will go deep this year definitely at one of them.