Nadal will now lock horns with Swiss star Stan Wawrinka, who fended off Croatia's Marin Cilic 7-6(3), 7-6(5) in under two hours to storm into the second round. 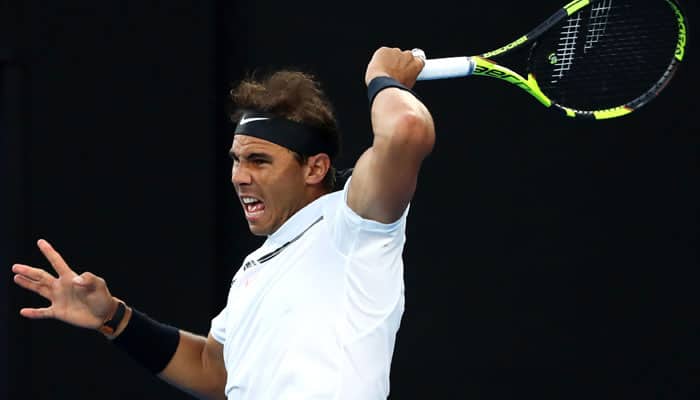 Spanish tennis maestro Rafael Nadal produced a rich vein of form as he eased past France's Adrian Mannarino to kick off his campaign in the ongoing Rolex Paris Masters with straight sets victory on Thursday.

The 33-year-old, who is seeking to clinch year-end No.1 spot in the ATP rankings, held off Mannarino 7-5, 6-4 in a thrilling opening round of the men's singles event that lasted one hour and 48 minutes.

In the opening set, Mannarino erased Nadal's first three set points before the Spaniard bounced back and eventually clinched the set when the the Frenchman netted a backhand.

Nadal then broke Mannarino in the 10th game of the second set when the French player comitted back-to-back unforced errors to emerge victorious.

Following the clash, Nadal said that he was quite satisfied with his performance as he seved really well and played at the right level throughout the first match.

“I know how dangerous Adrian is in this court. The court here is fast, the bounce is low, so I think is a perfect court for him. So I went on court knowing it [was] going to be very tough one. I needed to play well, and I think I did. My serve worked very well during the whole match. I think I played at the right level," the Association for Tennis Professionals (ATP) quoted Nadal as saying.

Notably, it was Nadal's first appearance in Bercy since 2017 and only the seventh time overall. The Spaniard has won only one indoor hard-court title during 2005 Madrid.

“Not easy to come back on the Tour after a while without being on the Tour. And playing in this surface... and against a very dangerous opponent, in the first round for me, second for him. So [I' m] very happy with the victory," he added.

Nadal will now lock horns with Swiss star Stan Wawrinka, who fended off Croatia's Marin Cilic 7-6(3), 7-6(5) in under two hours to storm into the second round.