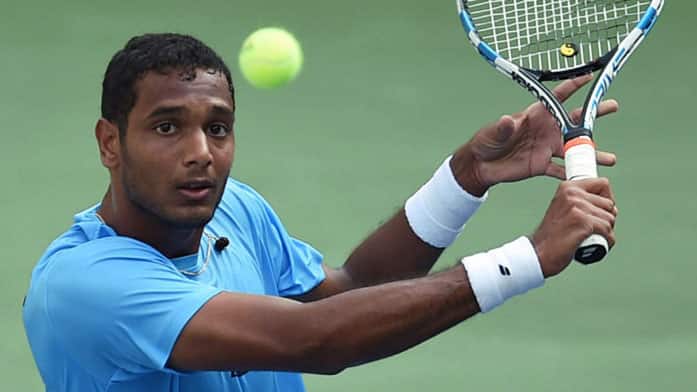 Ramkumar Ramanathan's serve deserted him at crunch moment as he missed out on a memorable win against world number 45 Malek Jaziri and crashed out of the Tata Open Maharashtra on late Wednesday night.

Staying solid on his service games was key to Ramkumar's fight but he served four consecutive double faults across two games to lose 7-6(6), 6-7, 3-6 after battling hard for two hours and 46 minutes.

After winning the first set, Ramkumar squandered three break points in the second set, allowing the fourth seed Tunisian to claw his way back in the match.

Despite serving much better than Jaziri, the 24-year-old from Chennai ended up on the wrong side.

Jaziri, who beat then world number 4 Grigor Dimitrov and world number seven Marin Cilic in the 2018 season, struggled with his first serve as Ramkumar's unrelenting returns made it difficult for him. Jaziri committed eight double faults.

By reaching the final of Hall of Fame Open in Newport last year, the 24-year-old showed that he could perform at the ATP 250 level but lacked consistency.

Jaziri will next take on comeback-man Steve Darcis, who beat talented American youngster Michael Mmoh 4-6 7-6(4) 6-2 in his second-round.

It was battle from the baseline from the beginning as the first two games lasted good 12 minutes. Jaziri was hitting very deep to keep Ramkumar far behind the baseline, moving him on both flanks.

The Indian though served big and found a way to outlast his opponent in rallies to lead 2-0 after a break in the second game. Jaziri though helped him by serving two double faults.

The Tunisian though broke back with fierce returns in the next game, which he ended with a crushing forehand service return winner.

Jaziri averted another immediate break to make it 2-2 as Ramkumar could capitalise on two chances in the fourth game.

After serving out the 11th game with his 10th ace, Ramkumar earned a set point in the next game in which four deuce points were played, but Jaziri held.

In the tie-breaker, Ram got an early break mini break to zoom to 4-1 but soon it was Jaziri, who had a set point in his pocket. Ramkumar held his nerves to save that and grabbed the opening set with a forehand passing winner.

The second set too was fought intensely, where Ramkumar had one break chance in the ninth game and two in the 11th but the Indian could not convert.

Ramkumar fired three consecutive aces to take it to tie breaker, in which he pulled away 3-0 but lost five points in a row and eventually the set.

Two forehand errors cost Ramkumar the fifth game, which pushed Jaziri ahead 3-2 but he broke back immediately.

Unusual three double faults by Ramkumar at 15-15 resulted in another break. It was first bad service game from Ramkumar in the match.

Pressure got to him as lost the game at love when he was serving to stay alive in the match.

Later, South African Anderson had to give his all before prevailing 7-6(2) 7-6(6) over Serbia's Laslo Djere in two hours and eight minutes.

Ranked 93, Illya Ivashka of Belarus stretched world number 30 Simon, who had to grind his way to quarterfinals with a 6-7 (3) 6-2 6-1 after battling hard for two hours and 31 minutes.

Third seed Simon, who usually has effortless movement had to run a lot on court, with Ivashka returning almost everything.