The 23-year-old Wimbledon champion, who climbed to the top of the WTA rankings on Monday, hardly broke sweat against the Frenchwoman, ranked 20th in the world, on her way to victory in an hour and 20 minutes. 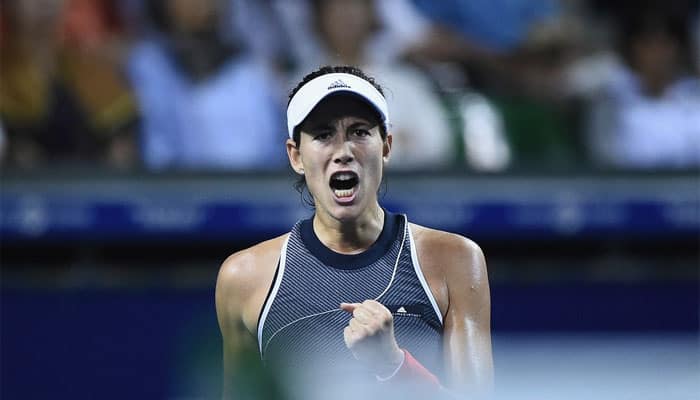 Tokyo: World number one Garbine Muguruza put on a clinical display to power past Caroline Garcia 6-2 6-4 in the Pan Pacific Open quarter-finals in Tokyo on Friday.

The 23-year-old Wimbledon champion, who climbed to the top of the WTA rankings on Monday, hardly broke sweat against the Frenchwoman, ranked 20th in the world, on her way to victory in an hour and 20 minutes.

"To achieve this dream I`ve had since I was a child gives me a lot of confidence first," Muguruza said in a courtside interview. "A boost of motivation to hold this position - because I think it`s the best."

Muguruza took a 2-1 lead in the first set after an early break and continued to dominate until midway through the second, nullifying Garcia`s serve twice more as she looked to close out the contest quickly.

Garcia, however, staged a mini-revival when she converted her only break-point opportunity in the sixth game of the second but the Spaniard regained control of the contest with another break in the very next game.

The 2016 French Open winner will face defending champion Caroline Wozniacki of Denmark who went through to the semi-finals after Slovakia`s Dominika Cibulkova was forced to retire with a right thigh injury while trailing 3-6 7-6(5) 3-1.

After Cibulkova breezed through the first set, peppering the court with her powerful forehands, there were six consecutive breaks of serve at the start of the second.

The world number nine got a break in the 11th game to go 6-5 up but Wozniacki, seeded third, saved two match points and finally took it to the tiebreak to force a decider.

The Dane got an early break in the final set to go 3-1 up before her opponent could no longer continue.

Earlier, Germany`s Angelique Kerber won a battle of former world number ones against Karolina Pliskova 7-6(5) 7-5 to set up a semi-final clash against Anastasia Pavlyuchenkova.

The two-time grand slam champion, who defeated her Czech opponent in their last meeting at the 2016 U.S. Open final, converted her fifth match point to register a first win over a top-20 player this season.

"Being back in the semis here in Tokyo is a great feeling," Kerber, who last reached the semi-finals at the event in 2014, said after her victory.

"It`s always tough to play against (Pliskova), so I was trying to focus on my game. I think I played a good match today."

Nimble on her feet, Kerber, who has dropped to world number 14 since storming to the Australian and U.S. Open titles last year, put immense pressure on Pliskova`s serve but failed to convert 12 of her 13 break-point opportunities.

She did, however, hold her nerve during the first set tie-break to edge ahead and then finally broke in the 12th game of the second set to seal a spot in the last four.

Russian Pavlyuchenkova defeated another Czech player, Barbora Strycova, 5-7 6-3 6-1 to advance to the semi-finals.