In a rematch of the Wimbledon 2021 final, Novak Djokovic will next meet sixth seed Matteo Berrettini in the quarterfinals. 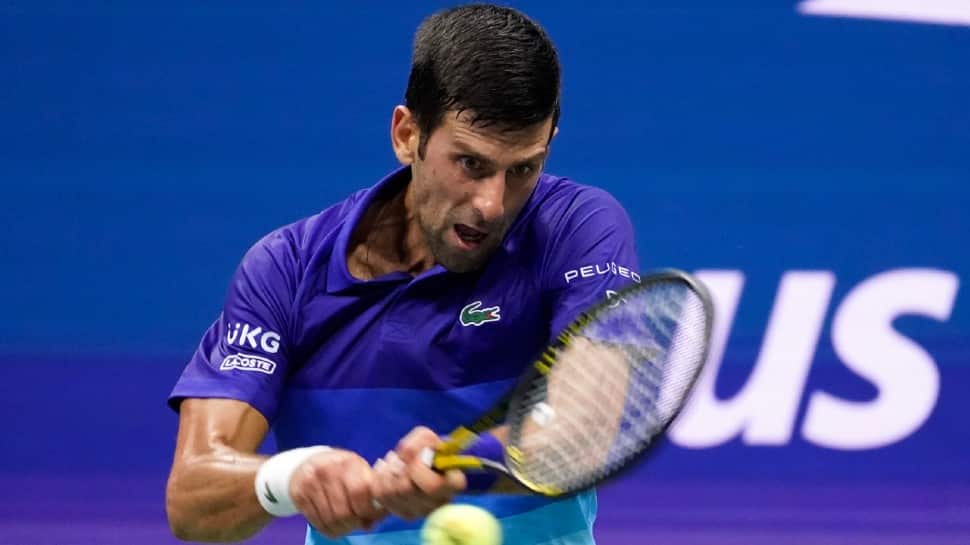 World No. 1 Novak Djokovic returns to Jenson Brooksby of the US in their US Open 2021 fourth round match. (Source: Twitter)
Share:
Written By:

World No. 1 Novak Djokovic needs just nine more sets to complete the calendar-year Grand Slam after surviving a gruelling fourth round match against American Jenson Brooksby at the US Open on Monday (September 6) night. In a thrilling clash under the lights, the top seed overcame a first-set wipe-out to deny the dogged No. 99 1-6, 6-3, 6-2, 6-2 in two hours and 58 minutes.

Djokovic extended his unbeaten record against Americans at their home Slam to 11-0 and his winning streak against Americans overall to 21. In a rematch of the Wimbledon final, Djokovic will next meet sixth seed Matteo Berrettini. The Italian earlier defeated German qualifier Oscar Otte in four sets.

Nole joins a list of #USOpen legends with his 79th singles win in New York. pic.twitter.com/moD9RuVbPV

Djokovic has already won 7 matches after dropping the opening set at a major this season. An 8th win in that situation would be the most in a calendar year since the Open Era began in 1968.

For the second consecutive match the world number one came out flat and dropped the opening set, something he will not want to do in his quarter-final when he faces Italian Matteo Berrettini in a rematch of the Wimbledon final which he won in four.

The sixth seeded Italian will mark a big step up in quality for Djokovic, who has not faced anyone ranked inside the top 50, including a qualifier and a wildcard. The match got off to an extraordinary start as Brooksby took the first set with shocking ease.

Playing for the first time on Arthur Ashe Stadium against one of the all-time greats, Brooksby was unfazed while three-times champion Djokovic sprayed shots helter-skelter, committing 11 unforced errors to just one by the young American.

That was the wake-up call Djokovic needed and he broke Brooksby at the first opportunity in the second set, letting out a mighty roar. Djokovic would win the second but the 20-year-old American made him work for every bit of it, particularly in a grinding fifth game that lasted close to 20 minutes before Brooksby would get the break.

The last American man standing and coming off his first ever five-setter, Brooksby began to fade in the third, going down a double break as Djokovic finally began to dial in his game. Leading 2-1, Djokovic continued to improve in the fourth and moved clear with a double break and offering zero break point opportunities to his opponent before sealing the win.