The Magical festivities of Navratri all across India

With Navratri just around the corner, there is a significant degree of bliss and felicity in the air surrounding people of different cultural backgrounds. Owing to the season of jubilant festivities, Navratri is celebrated all across the country in its own unique and high spirited ways, spiritually devoted to the nine divine forms of goddess Durga. Let's take a tour through the 9 variegated festive celebrations across the country to get drenched in the colour of devotion and love. 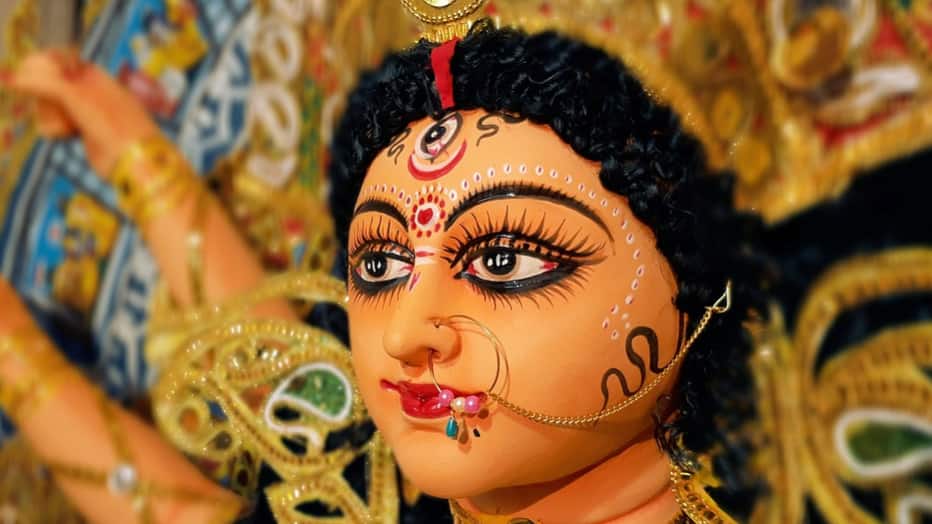 Dandia and Garbha in Gujarat

Gujarat is the epitome of festivities, with people robed majestically in their traditional attires, dancing out the 9 blissful nights performing garbha and dandia together, with the music echoing in the air of the colourful cities. An earthen pot with holes carved on it called 'Garbi' is lighted with diyas, symbolizing the womb which is the ultimate source of life and is used for the Arti in the evening.

Durga Puja is celebrated during the last four days of Navratri in West Bengal and other eastern states bringing the cities to a halt. The four-day-long extravaganza is celebrated with splendid vigour and enthusiasm in pandals ceremonializing the victory of Maa Durga over the evil  Mahishasura. Large, beautiful idols of Maa Durga, Kartikeya, Ganesha, Saraswati and Lakshmi are sculpted and worshipped with sheer devotion with a belief of victory of good over evil.

The New beginnings in Maharashtra

Navratri is perceived as a new beginning by the people of Maharashtra. Owing to the close proximity with Gujarat, it resembles in its celebrations, lit up with lights and music in every nook and corner of the state with people flipping over and taking delight in the festivity. Furthermore, women get together to gift coconut, beetle leaves and beetle nuts to each other and put haldi and kumkum on the foreheads of married women for the long lives of their spouse.

Himachal Pradesh is a pristine place which celebrates Navratri on the tenth day, known as Kullu Dussehra, marked by the return of Lord Rama to Ayodhya from Sri Lanka after prevailing over Ravana. Families rejoice and get together with their relatives to pay homage to the all-powerful Lord Rama. On Dusshera or Dashami, the deities from the temples of the village are taken out in processions.

The devotees of Tamil Nadu dedicate the nine days to the Goddess Durga, Goddess Lakshmi and Goddess Saraswati, 3 days each. Friends and relatives visit each other and gift jewellery, clothes and sweets symbolizing their marital status and pray for the long lives of their husbands. A special feature is recognized as 'kolu' which is a make-shift of nine stairs representing the nine nights and is decorated with beautiful idols and dolls as a depiction of goddesses which are passed over from generation to generation.

Batukamma Panduga means 'come alive Mother goddess' and is celebrated during the Navratri in Andhra Pradesh, dedicated to goddess Shakti. Women stack together seasonal flowers in seven layers to give them the structure of a pot known as 'Bhatukamma' and perform pooja for 9 days, after which the Bhatukamma is set afloat in any water body.

Unlike other states, last three days of Navratri are celebrated in Kerala by worshipping Goddess Saraswati to grant them knowledge and wisdom. The Keralites abstain from books and music instruments during these three days as they are worshipped in front of Goddess Saraswati's idol on Ashtami, Navami and Vijay Dashmi.

The celebration of Navratri in Karnataka dates back to the time when it was celebrated back in 1610 by the great Vijayanagara dynasty and is known as 'Naada Habba' by the localites. Notwithstanding the same reason of celebration being the victory of Goddess Durga over Mahishasura, the way of rejoicing is significantly unique which involves the procession of elephants on the street and a large number of fairs and exhibitions of the handicrafts and various artefacts is organized.

Punjab being the state of delicious food has an uncanny way of paying allegiance to the goddess Shakti. They keep fasting for the first seven days of Navratri which ends on the eighth or ninth day by worshipping 9 little girls and a boy, is known as 'Kanya Poojan' and serve them poori, halwa and chana. Many Punjabis also organize jagarata which involves waking for the whole night to worship the Goddess and seek blessings.