Ahead of Ram Temple Bhoomi Pujan in Ayodhya, 'Nishan Puja' held at Hanumangarhi

Ahead of Ram Temple Bhoomi Pujan in the holy town of Ayodhya on August 5, special prayers were offered to Lord Hanuman at Hanumangarhi on Tuesday (August 4, 2020). According to an old tradition, ‘Nishan Puja’ was conducted by the priests at the Hanumangarhi. 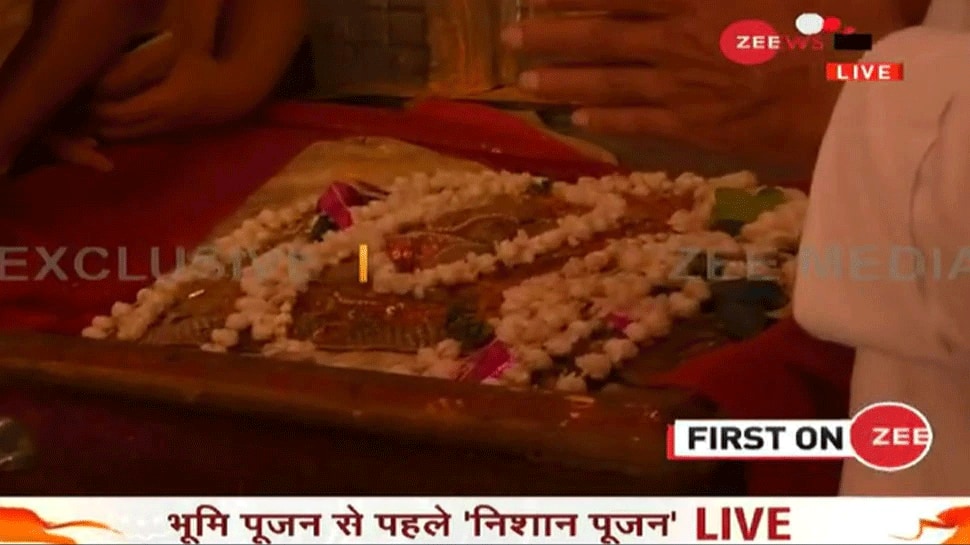 AYODHYA: Ahead of Ram Temple Bhoomi Pujan in the holy town of Ayodhya on August 5, special prayers were offered to Lord Hanuman at Hanumangarhi on Tuesday (August 4, 2020). According to an old tradition, ‘Nishan Puja’ was conducted by the priests at the Hanumangarhi around 9 AM.

The ‘Nishan Puja’ was conducted to please the deity before the formal commencement of the construction of Ram Temple in Ayodhya. The tradition of conducting 'Nishan Puja' at the Hanumangarhi temple is nearly 1700 years old. Lord Hanuman is considered as an ardent devotee of Lord Ram and that’s why there is a tradition of pleasing Lord Hanuman and taking his blessings before beginning any auspicious project.

On the other hand, ‘Ram Archana’ is being held at the Ram Janmabhoomi Complex in Ayodhya. It is believed that Lord Rama will be pleased through ‘Ram Charan Pujan.’

For pleasing the deity, ‘Ram Charan' is worshiped in a special way. Noted saints from Varanasi, Ayodhya, Delhi, Haridwar and South India have been invited for ‘Ram Charan Pujan.’

What is a Nishan Puja

Lord Hanuman, the biggest devotee of Lord Rama, is considered as the chief guard of Lord Ram's residence. According to the legends, no one gets entry into Lord Ram’s place without Lord Hanuman’s permission. This is why ‘Nishan Puja’ is conducted to please the monkey god before beginning the Ram Temple construction.

Nishan Puja holds great religious significance since Lord Hanuman was very dear to Lord Ram. Hence, for the success of any auspicious work, it is considered very important to take the blessings of Lord Hanuman.

Ahead of the 'Bhoomi Pujan' on August 5, the General Secretary of the Sri Ramjanmbhoomi Teerth Kshetra Trust has extended an invitation to 175 people, including 135 saints of 35 religious organisations, to attend the foundation stone-laying ceremony of Ram Temple.

"We have sent invitations to 175 people including 135 saints of about 36 religious organisations of India in this event. We have also invited Iqbal Ansari (former litigant in Ayodhya land dispute case) and Padma Shri Mohammed Sharif (who does cremation of unclaimed dead bodies according to their religion) to attend the foundation stone laying ceremony," Rai said while addressing the press conference.

He also said that all the invitees will be in Ayodhya by Tuesday evening.

Acharya Satyendra Das, chief priest of the makeshift temple on Sunday had stated that the idol of Ram Lalla will be dressed as per the day`s significance. "For Monday, it would be white clothes, for Tuesday it would be red clothes and for Wednesday it would be green clothes. We have also kept an option of yellow and saffron clothes," he had said.