Yusuf Khan, son of Ishrat, who provided a pistol to the killers of Kamlesh Tiwari, was arrested in a joint operation by the Gujarat ATS and the UP Police from Kanpur.

KANPUR: The Uttar Pradesh Police on Friday arrested a 24-year-old man, who is alleged to have provided a pistol to the killers of Hindu Samaj Party leader Kamlesh Tiwari from Kanpur.

He has been identified as Yusuf Khan, son of Ishrat.

''Yusuf Khan, who provided a pistol to the killers of Kamlesh Tiwari, was arrested in a joint operation by the Gujarat ATS and the UP Police around 6 pm from Ghantaghar which comes under Harbansh-Mohal Police Station in Kanpur,'' the UP Police said in a statement.

Yusuf Khan is being interrogated in connection with the case, it added. 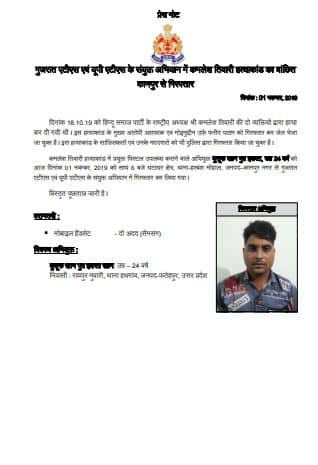 Two Samsung mobile phones were also seized from him, the UP Police said.

On Thursday, the UP Police had arrested one more person from Bareilly in connection with the Kamlesh Tiwari murder case.

The accused, identified as Kamran, allegedly helped the assailants - Moinuddin and Ashraf, in trying to escape to Nepal.

He used to work in the travel agency of Naved, another accused who has been arrested.

A total of six persons have been arrested so far.

Other accused - Rashid Pathan, Faizan Sheikh, and Maulana Mohsin Sheikh - were sent to police custody last week in connection with the case.

Kamran aided the two accused - Moinuddin and Ashfaq in committing the crime, the police said after his arrest.

The main accused who killed Tiwari have been identified as Ashfaq Hussain and Moinuddin Khurshid Pathan (27).

Both were arrested by Gujarat`s Anti-Terrorism Squad (ATS) from the Gujarat-Rajasthan border on October 21.

Kamlesh was shot in his house in the Khurshid Bagh area of Lucknow on October 18 and succumbed to his injuries at a hospital during treatment.