Both Priyanka and Rahul attacked the BJP government behind the rising rape-murder incidents in the country. 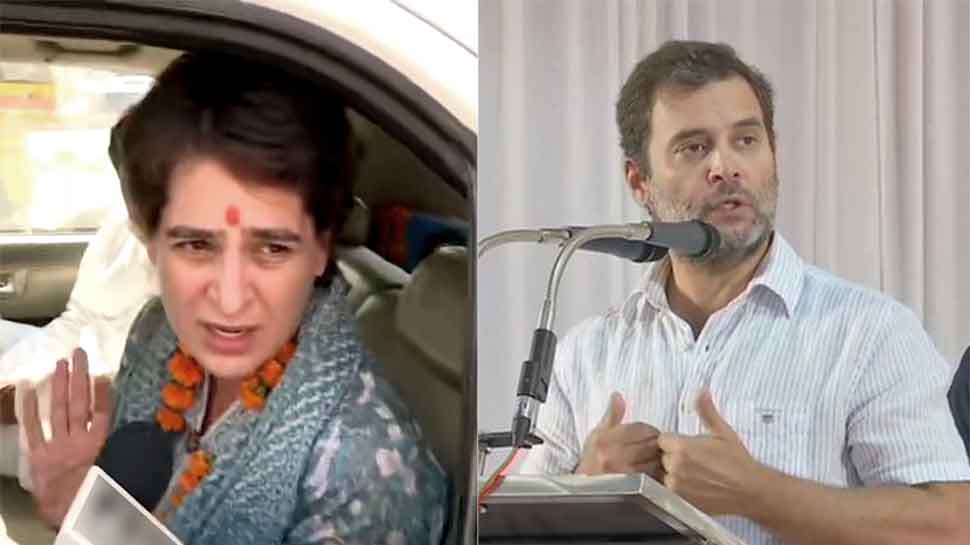 New Delhi: Congress workers, who staged a protest against the Bharatiya Janata Party (BJP) government in Lucknow on Saturday (December 7), were lathicharged by the Uttar Pradesh Police. The incident was reported outside the UP Vidhan Sabha, where Samajwadi Party president and former chief minister Akhilesh Yadav also sat on a 'dharna' in protest over the incident.

The Congress leaders are claiming that the Unnao rape-murder accused are being shielded by the police as they have some BJP connection. The protesting leaders alleged that the Yogi Adityanath government in Uttar Pradesh protects criminals due to which such incidents are happening again and again.

In the meantime, Congress general secretary Priyanka Gandhi Vadra today met the family of the Unnao rape victim, who died last night at a hospital in Delhi's Safdarjung hospital after she was set on fire by the men who allegedly raped her.

Attacking the Uttar Pradesh government, Priyanka asked why was the 23-year-old woman not given police protection after a similar incident had taken place in Unnao in July this year. Earlier, a car with a woman, who had accused MLA Kuldeep Singh of rape, was hit by a truck. "Keeping in mind the previous incident of Unnao, why did the government not give immediate protection to the victim? What action was taken against the officer who refused to register her FIR?" Priyanka said in a tweet today.

Attacking the UP government, Priyanka claimed that law and order in the state has deteriorated completely. "It is a failure of all of us that we could not give her justice. Socially, we are all guilty, but it also shows the law and order situation in Uttar Pradesh," she said.

In the meantime, Congress leader and party former president Rahul Gandhi too launched a sharp attack on the BJP government over the recent incidents of rape-murder in the country, saying, people taking law and order in their hand stems from the fact that 'the man running the country believes in violence'.

"There is a reason for this breakdown of our institutional structures, a reason that people are taking law into their own hands. It is because the man who is running this country believes in violence and indiscriminate power," Rahul was quoted as saying by ANI today. "Violence against minority communities, hatred being spread against them. Violence against Dalits, thrashing them, cutting off their arms. Atrocities against Tribals, snatching their land. There is a reason for this dramatic increase in violence," he said.

Rahul further added, "You have seen the increase in violence across the country, lawlessness and atrocities against women. Everyday, we read about some woman being raped, molested, thrashed."

The 23-year-old was allegedly set ablaze while she was on her way to a local court hearing in the rape case which she had filed in March earlier this year. The five accused, who were out on a bail, attacked her near a village intersection and set her ablaze after pouring kerosene on her. She suffered 90 per cent burns and was later airlifted to Delhi`s Safdurjung hospital for treatment.

On Friday, the victim succumbed to her injuries at the Safdurjung hospital. According to the doctor, she suffered a cardiac arrest and while the doctors tried to resuscitate, they failed to save her.