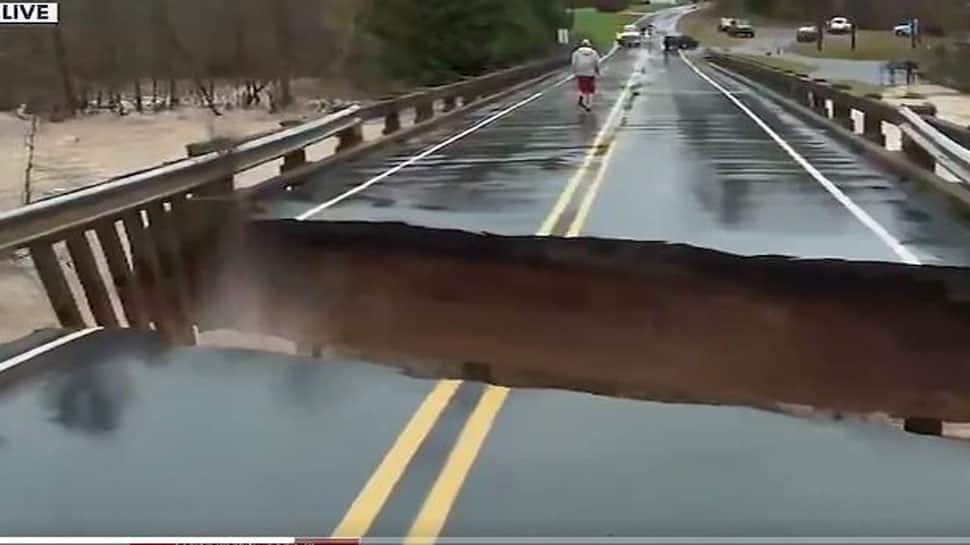 Live reporting is always considered a tough task and it becomes risky specially while reporting natural disasters. Recently, a reporter in the US had a close shave when she was reporting about extreme flooding while standing on a bridge and the bridge collapsed while she was live on-air.

The terrifying footage of that incident is now going viral on social media with netizens lauding her professionalism.

Amber Roberts, a reporter of Fox 46, was doing a live about flooding near the Hiddenite Bridge in Alexander County, North Carolina when the incident happened. While she was on-air, a part of the birdge collapsed suddenly, sending Amber and her camera man running for their lives.

Roberts was heard screaming: “It’s splitting”, as the cameraperson filmed a shot of the collapse. “This is incredible,” she said. “Okay, we’re backing up. Just right here live on TV we saw the road collapse, the same road that we were just standing on seconds ago,” she added.

I am SO #thankful me and my @FOX46News #photojournalist, @JonMonteFOX46 are okay. I'm sending #prayers up to the people of #Alexander #County impacted by today's #flooding. pic.twitter.com/9KxABhpQyB

People were happy to know that Roberts and the camera man were safe but many netizens urged the journalists not to risk their lives. There were many who praised Amber and her camera man for carrying on their duty despite the horrifying incident.

The National Weather Service has said that a Flash Flood Emergency was in effect for areas in Catawba County and local emergency management officials in the area reported flooded roads, water rescues, and evacuations.