It is to be noted that T-Series has managed to win the race three-four times but the Indian music brand had failed to maintain its leads for long.

Indian music brand T-series is on course to race ahead of PewDiePie in the race to YouTube supremacy as the PewDiePie was just 370 subscribers ahead of T-Series at 22:30pm IST on Tuesday. 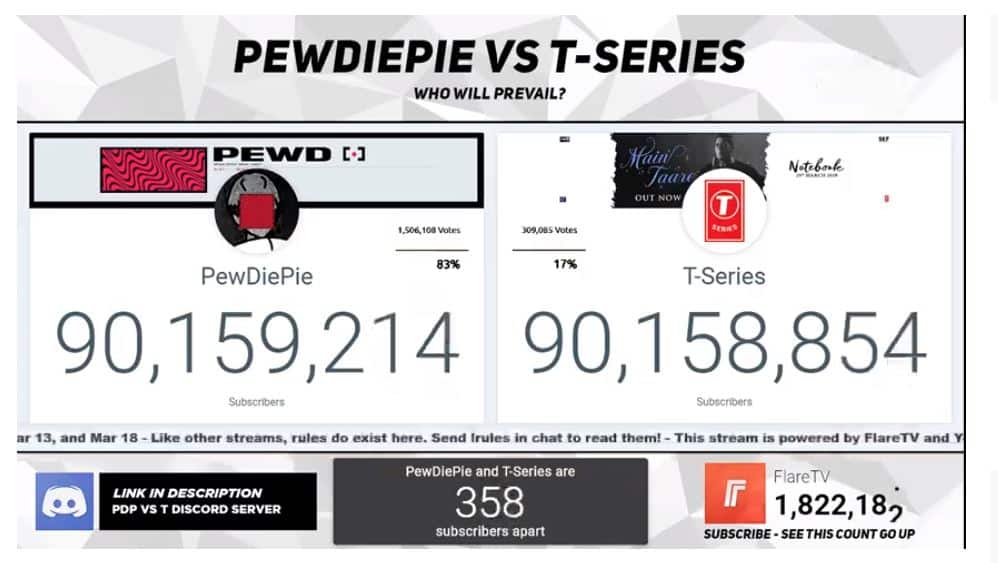 It is to be noted that T-Series has managed to win the race three-four times but the Indian music brand had failed to maintain its leads for long. On February 22, T-Series managed to dethrone PewDiePie from the top slot for about eight minutes.

"There is an Indian YouTube channel on the brink of becoming World`s No.1. It has taken us a lot of effort to come this far. To take my father Mr. Gulshan Kumar`s dream forward, I started this channel. Today, it belongs to you, to the entire nation. It`s a historic moment for all of us. So let`s come together and subscribe to T-Series YouTube channel and make India proud," he spoke in a video message.

T-Series had just 30 million subscribers on its YouTube channel at the beginning of 2018 but the Indian music brand witnessed a drastic jump in its subscriber to over 70 million in just six months. This became possible only after the introduction of new changes in Indian mobile and data service.

T-Series is a well-known music brand in India since the 1980s. It was founded by Gulshan Kumar who was assassinated in 1997 by the underworld. Bhushan Kumar is the son of Gulshan Kumar.  T-Series has 29 TV channels in several Indian languages. It hosts some of the biggest Indian artists, drawing millions of views.