Led by Bhushan Kumar, T-Series had just 3 crore subscribers at the beginning of 2018 and rocketed to over 7 crore in a short time. 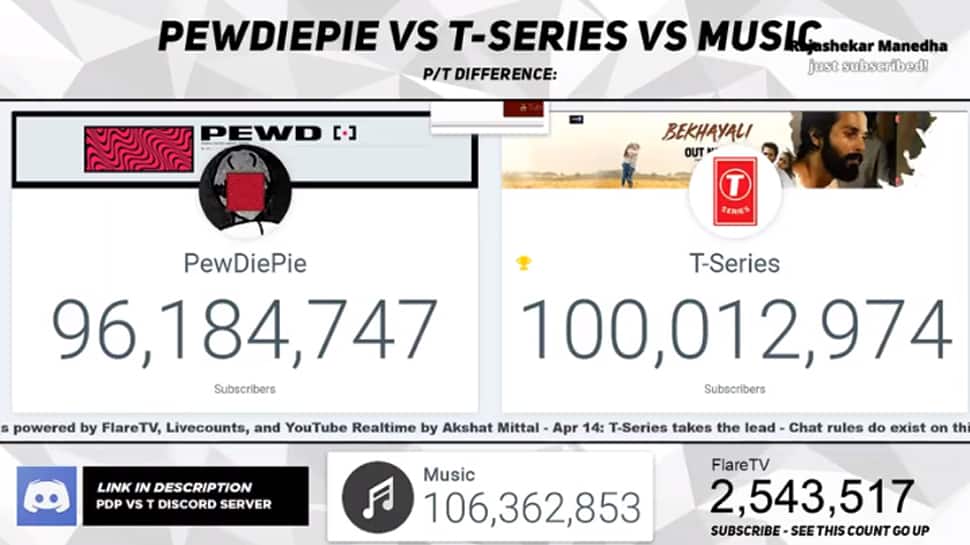 Indian music giant T Series on Wednesday became the first YouTube channel to have gained 10 crore subscriber-base. As of 5 pm on Wednesday, it has 100,012,974 subscribers. T Series is currently at the top spot when it comes to subscriber base on YouTube after it dethroned Swedish gamer Felix Kjellberg's channel PewDiePie. T Series and PewDiePie had been involved in a neck and neck contest for months for the top YouTube spot. As of Wednesday, PewDiePie has 96,184747 subscribers.

Led by Bhushan Kumar, T-Series had just 3 crore subscribers at the beginning of 2018 and rocketed to over 7 crore in a short time. The meteoric rise was propelled by the introduction of new changes in Indian mobile and data service. T-Series is a popular music and production house in India since the 1980s. It has 29 TV channels in several Indian languages. It hosts some of the biggest Indian artists, drawing millions of views.

In May, a soft-spoken and uncharacteristically serious Felix 'PewDiePie' Kjellberg had called for an end to the “Subscribe to PewDiePie” campaign. His message came after terrorist Brenton Tarrant on 15 March 2019 opened fire and killed 51 people inside two mosques in New Zealand's Christchurch. The 28-year-old Australian mercilessly shot dead people gathered for prayers inside a mosque in an otherwise peaceful locality. Before carrying out the attacks, he said on FB live stream, "Remember lads, subscribe to PewDiePie."

Speaking about the incident, more than 45 days after the attacks, PewDiePie says in the video, “To have my name associated with something so unspeakably vile, has affected me in more ways than I’ve let show.”