Popular Indian music label T-Series on Thursday finally managed to race ahead of PewDiePie to become the number one YouTube channel in the world with a comfortable margin.

Popular Indian music label T-Series on Thursday finally managed to race ahead of PewDiePie to become the number one YouTube channel in the world with a comfortable margin.

T-Series was over 24,000 subscribers ahead of PewDiePie at 18:45pm IST. The margin is quite good and it seems that T-Series would keep on increasing the lead and would stay on the top for longer period. 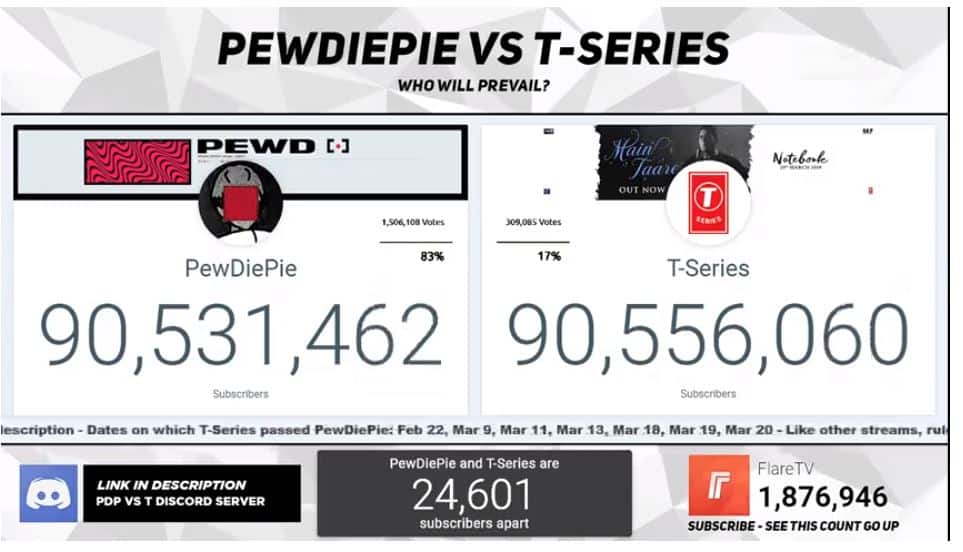 Swedish gamer Felix Kjellberg's PewDiePie was the most subscribed YouTube channel for the last six years and T-Series started to give competition for the YouTube supremacy to PewDiePie around six months ago.

It is to be noted that T-Series had managed to race ahead of PewDiePie three-four times in the recent past but the lead was not big and hence the Indian music brand had failed to remain at the top spot for long. T-Series overtook PewDiePie for about eight minutes on February 22.

He posted a video message on Twitter and said, "There is an Indian YouTube channel on the brink of becoming World`s No.1. It has taken us a lot of effort to come this far. To take my father Mr. Gulshan Kumar`s dream forward, I started this channel. Today, it belongs to you, to the entire nation. It`s a historic moment for all of us. So let`s come together and subscribe to T-Series YouTube channel and make India proud."

At the beginning of 2018, T-Series had only 30 million subscribers on its YouTube channel but the company sawa a huge jump in next six months as its number of subscribers  jumped to over 70 million. This became possible due to the introduction of new changes in Indian mobile and data service.

T-Series is a popular music brand in India since the 1980s. It is led by Bhushan Kumar, who is the son of T-Series founder Gulshan Kumar. T-Series has 29 TV channels in several Indian languages. It hosts some of the biggest Indian artists, drawing millions of views.