In 2016, PewDiePie was even on Time's magazine's list of the world's 100 most influential people.

Will T-Series be able to surpass PewDiePie as the most subscribed channel on YouTube? The wait for the answer is on as the gap between the two continues to be within one lakh. At the time of filing this story, the Indian record label was behind the Swedish channel by 78,405 subscribers. If T Series is able to surpass PewDiePie, it will be the first time in six years that the Swedish channel is pushed down from the top of the list of the most subscribed channels on YouTube.

In 2016, PewDiePie was even on Time's magazine's list of the world's 100 most influential people. He had faced a row in 2017 when he paid two people in India to hold up a sign that read 'death to all Jews' and then responded to it with criticism while terming it a joke. 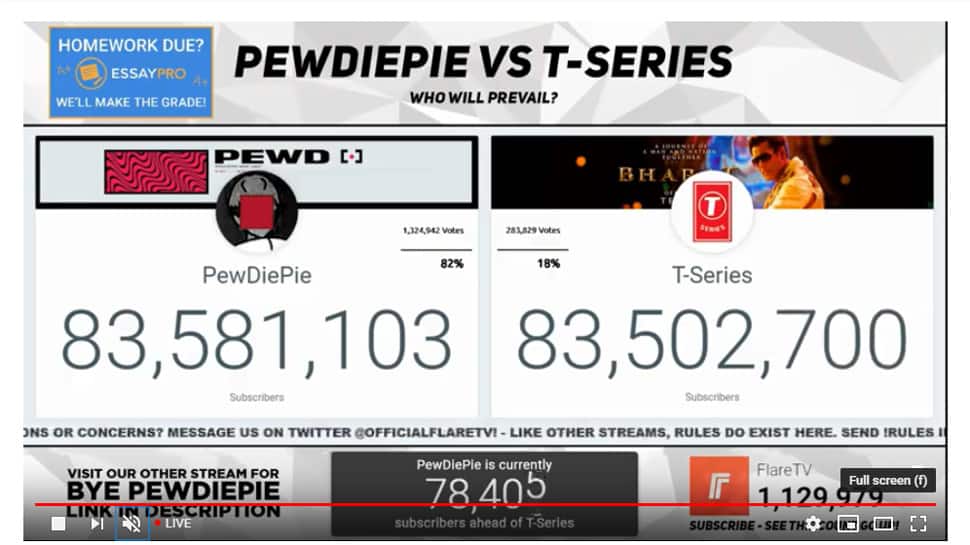 Difference in subscribers at 10:30 am

PewDiePie, whose real name is Felix Kjellberg, had defended himself claiming that he did not endorse hate-based groups. "I think of the content that I create as entertainment, and not a place for any serious political commentary. I know my audience understand that, and that is why they come to my channel. Though this was not my intention, I understand that these jokes were ultimately offensive," he had clarified his stance in a post on Tumblr.

T Series, on the other hand, is a household name in India since the 1980s. Lead by Bhushan Kumar, the son of T Series founder Gulshan Kumar who was assassinated by the underworld mafia D Company in 1997, the company has 29 TV channels in several Indian languages. It hosts some of the biggest Indian artists, drawing millions of views.

PewDiePie took the number spot as the most subscribed YouTube channel in 2013 with his comedy acts and video game commentary. He became an instant hit with his videos touching the nerves of young boys.

With the war drawing in closer between the two rivals, the supporters of PewDiePie are working hard to ensure it does not lose the top spot. They have been using several tactics like putting a million dollar billboard in Times Square and circulating a supportive tweet by a right-wing political party in the United Kingdom. His supporters even hacked the Wall Street Journal with a fake post in PewDiePie's favour.

Many of his contemporaries including Mr Beast, Logan Paul, Shane Dawson, have come out to support PewDiePie. Even SpaceX founder Elon Musk recently sided with the Swedish online sensation.

The Indian label may or may not surpass PewDiePie but till the difference remains close, all eyes will continue to be glued to the charts.