Internet services have been suspended and Section 144 has been imposed in the area after violence. 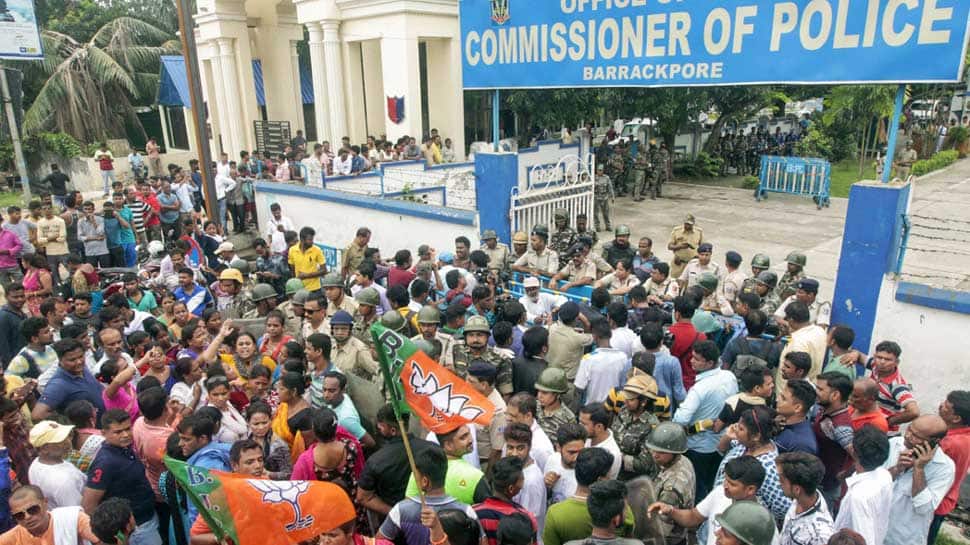 KOLKATA: A  three-member BJP central delegation will visit trouble-torn Bhatpara in West Bengal's North 24 Parganas district on Saturday, where two persons were killed and several others injured in clashes between two groups suspected to be affiliated to the ruling TMC and the saffron party.

According to BJP sources, the delegation, which will be led by former union minister SS Ahluwalia, will assess the situation and submit its report to party president and Union Home Minister Amit Shah.

The ruling Trinamool Congress and the BJP have blamed each other for the clash, which is seen as an attempt to establish dominance in Bhatpara, which comes under the Barrackpore Lok Sabha constituency.

Bengal unit chief of the BJP, Dilip Ghosh said, ''We are sending a parliamentary team there. I demanded the Home Ministry should send a team to understand the situation.''

Pressing for a CBI inquiry into the alleged police firing that left two dead at Bhatpara, the BJP workers on Friday held a rally in the city protesting against the rampant violence across West Bengal.

The saffron party also staged a demonstration in front of Barrackpore Police Commissionerate, demanding the arrest of culprits involved in the violent incident at Bhatpara.

Two persons were killed and several people injured after a fresh flare-up of violence at Bhatpara on Thursday due to which the police had to open fire, prompting the administration to impose prohibitory orders in the affected areas.

The BJP`s protest rally was stopped by the police at Central Avenue even as they planned to march from the party`s state headquarters to Esplanade.

"People are threatened by the police and goons backed by Trinamool Congress. Many BJP workers were slapped with false cases. Chief Minister Mamata Banerjee is acting as a dictator in order to reclaim political ground in the state. She is against peace, though we keep on urging the same in the state," BJP state General Secretary Raju Banerjee alleged.

BJP leaders alleged that violence had been widespread across districts and was planned by state`s ruling Trinamool to frighten the common people.

In view of tension prevailing in the area, Section 144 has been imposed in Bhatpara and the adjoining areas.

He also alleged that the one of the deceased was shot in the head by the police "from point-blank range" on Thursday while several persons received bullet injuries.

As per sources in the local hospital and inputs from residents of the area, the two who died in the firing are Ram Babu Shaw and Dharambir Shaw.

BJP`s national Secretary Rahul Sinha said the party seeks a CBI probe into the incident to bring out the truth as local people said that two civilians were killed due to police firing.

About the TMC allegation that outsiders led by the BJP had incited the violence, Sinha said it was a "baseless" allegation and the CBI inquiry can expose the reality.

The violence erupted on a day the new Bhatpara police station was scheduled to be inaugurated by the DGP. But such was the ferocity of the clash that he returned midway and rushed to the state Secretariat, Nabanna where the government called an urgent meeting to tackle the violence.

Internet services in the affected area have also been restricted in view of sudden law and order problem.

Bhatpara falls under Barrackpore Lok Sabha constituency won by the BJP, while it also wrested the Bhatpara Assembly from the ruling Trinamool in the recent by-polls. Arjun Singh was also Chairman of the Bhatpara Municipality.