Clashes broke out after the police stopped the victory rally of BJP in West Bengal's North Dinajpur district on Saturday. 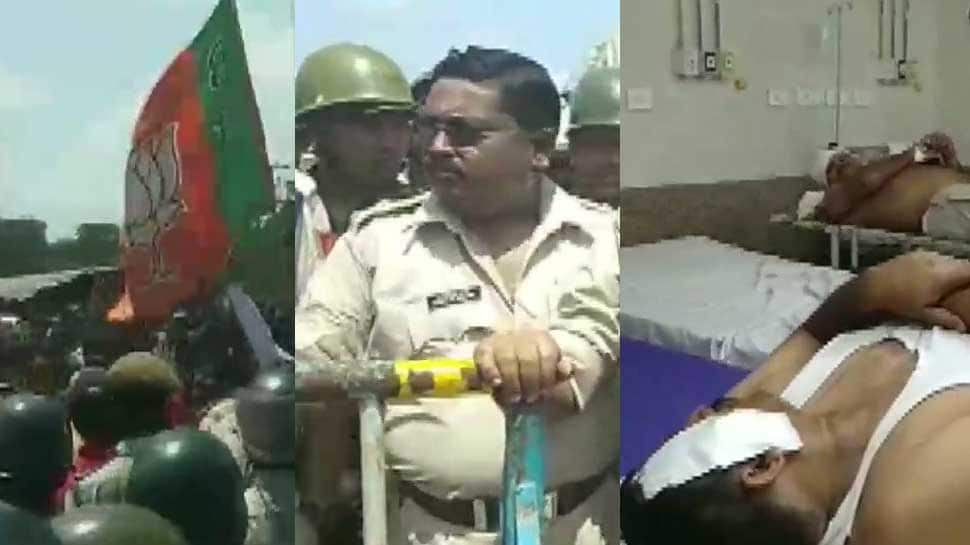 Gangarampur: Clashes broke out between BJP workers and police personnel after the latter stopped the victory rally of BJP MP Dilip Ghosh in Gangarampur in West Bengal's North Dinajpur district on Saturday in which several persons were injured.

One police sub-inspector and two civic volunteers were injured in the clash. They have now been admitted to a nearby hospital.

West Bengal: Clash broke out between BJP workers&police in Gangarampur,South Dinajpur after police allegedly stopped the rally of BJP MP Dilip Ghosh in the area. One police sub inspector & two civic volunteers who were injured in the clash have been admitted to a nearby hospital. pic.twitter.com/ljR1qIuPvI

A police officer alleged that BJP workers "forcibly took out" the procession 'Abhinandan Yatra' without taking any permission from the authorities concerned.''

When police tried to stop the rally, irate BJP workers clashed with them, following which a number of people from both sides suffered injuries, he said.

Talking to ANI, BJP MP Dilip Ghosh said, ''We are meeting people to thank them for voting for us. Police are not allowing us to meet people. Section 144 has been imposed at places. TMC supporters are attacking us, a few of our supporters and police personnel have been injured.''

"We have won 18 seats in West Bengal and our vote share has also increased by 40.5 per cent... We wanted to thank the people by organising these rallies. But, the state government is so afraid of the rise of the BJP that it is denying us permission to conduct rallies. We will go ahead with the marches even if we don't get clearance for them," Ghosh added.

BJP MP Dilip Ghosh: We are meeting people to thank them for voting for us. Police is not allowing us to meet people, Sec 144 has been imposed at places. TMC supporters are attacking us, a few of our supporters and police personnel have been injured. pic.twitter.com/T49AFGxtA0

"We also won 22 seats but we didn't organise any victory rally. The TMC does not want to disturb the law and order situation in the state," Chatterjee said.

It may be recalled that Chief Minister Mamata Banerjee had on Thursday banned victory rallies by any party in West Bengal, including the ruling Trinamool Congress.

On Friday, police registered suo motu cases against the BJP workers in North Dinajpur district for taking out victory rallies in violation of the state government order banning them.