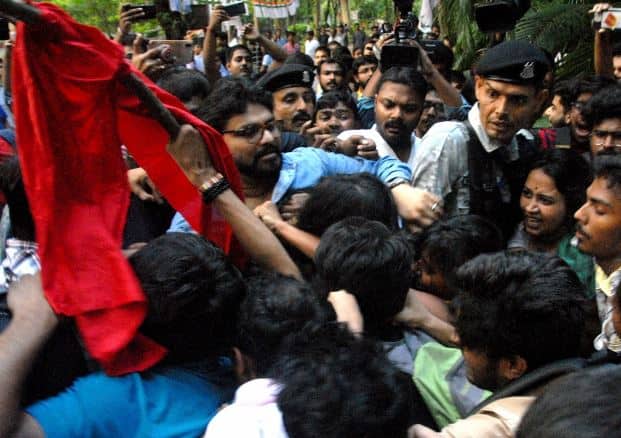 New Delhi: Almost a day after being heckled and manhandled by a group of students over his visit to the Jadavpur University, Union Minister and Asansol MP Babul Supriyo accused the West Bengal Chief Minister Mamata Banerjee of doing nothing to save him from the violence that took place on Thursday evening.

"At around 6.30-7.00 pm, we know to know that inspite of everyone, including the Kolkata Police Commissioner, being made aware of the decision, the Police decided to not take any action, while I was being attacked by the protestors," he said.

Accusing the Jadavpur University administration of inaction, he said, "The Vice-Chancellor knew this was going to happen. But did nothing about it. I am not at all shaken by the physical assault but I'm absolutely disillusioned and disgusted with the entire administration."

Thanking the West Bengal Governor Jagdeep Dhankhar, who is also the Chancellor of the Jadavpur University, for rescuing him from the campus during the mass violence, he said, "I am really thankful to him for helping me rescuing out of the campus amidst the chaos. He immediately drove to the university escorted by a large police force after having come to know of the situation. In the process, he also faced a demonstration and got detained for almost 1.5 hours by the protestors."

He also added that the protestors were not the university students but were hired goons of a pro-Naxal party.

Supriyo was on Thursday shown black flags and heckled by a section of students at Jadavpur University where he had gone to address a seminar organised by the Akhil Bharatiya Vidyarthi Parishad (ABVP) - a student wing of the RSS. He was slapped, kicked, shoved and detained for hours by the students. He was later rescued by Governor Jagdeep Dhankhar.