Controversial Kolkata cleric Maulana Nurur Rehman Barkati, the Shahi Imam of Tipu Sultan mosque, has been booked for not removing the red beacon atop his vehicle. 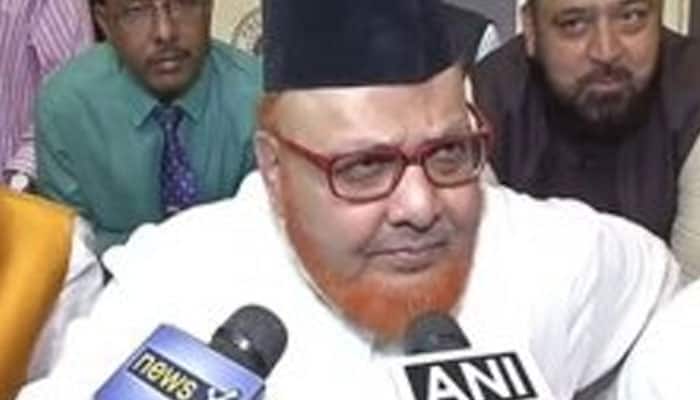 Kolkata: Controversial Kolkata cleric Maulana Nurur Rehman Barkati, the Shahi Imam of Tipu Sultan mosque, has been booked for not removing the red beacon atop his official vehicle.

ANI on Friday claimed that a case has been registered against the outspoken cleric in Topsia police station following a complaint by a BJP leader.

Barkati, who is known for issuing fatwas, had earlier as threatened to wage 'jihad' in the country if India is declared a 'Hindu Rashtra'.

"If namaz, azaan, Quran and Shariat law are banned then jihad will begin," Imam Barkati said while speaking to reporters.

"Why would this nation be a 'Hindu Rashtra', why can't it be a 'Muslim Rashtra'. Why can't the 25-30 crore Muslim population of India be given Pakistan, we will fight for Pakistan," the Shahi Imam of Tipu Sultan Mosque had said.

"If 'Hindu Rashtra' becomes a reality and azaan, cow meat, Quran are prohibited, then we will not spare you and even Prime Minister Narendra Modi," he warned.

When asked to elaborate on his 'jihad' terminology, Imam Barkati said, "In jihad everything will be finished, as it is happening in Afghanistan and across the world," adding that "we have been practising jihad for the last 100 years".

When asked to comment on West Bengal Mamata Banerjee's statement that she had never red beacon on her car, the Imam said, "During her younger days, the Trinamool Congress supremo used to eat everything; she even used to have mutton biryani. However, these days she is having cucumber and (muri) puffed rice, so shall we also eat the same."

Threatening to violate the Centre's order banning red beacon, Barkati said that he will continue to use the red beacon as permission for it was given by the erstwhile British government.

"I am a Shahi Imam and hence I won't give up red beacon despite court's order. All Shahi Imams have been using 'lal batti' and nobody has ever objected to it," Imam Barkati said.

According to the Modi government's order, after May 1, no one will be able to put red light atop his/her vehicle. Blue light will be used only for emergency vehicles in the country...Neither the states nor the Centre will have power to give any special permission (for use of beacon lights).

PM had said that every Indian is a VIP and the culture of beacons on vehicles carrying dignitaries should have gone long ago.

Earlier, Rashtriya Swayamsevak Sangh (RSS) chief Mohan Bhagwat had said that India is a “Hindu Rashtra” and there is a need to organise all Hindus in the country for which this is “favourable time”.