The Gangasagar Mela is rated as the second largest assembly of people after the quadrennial Kumbh Mela. 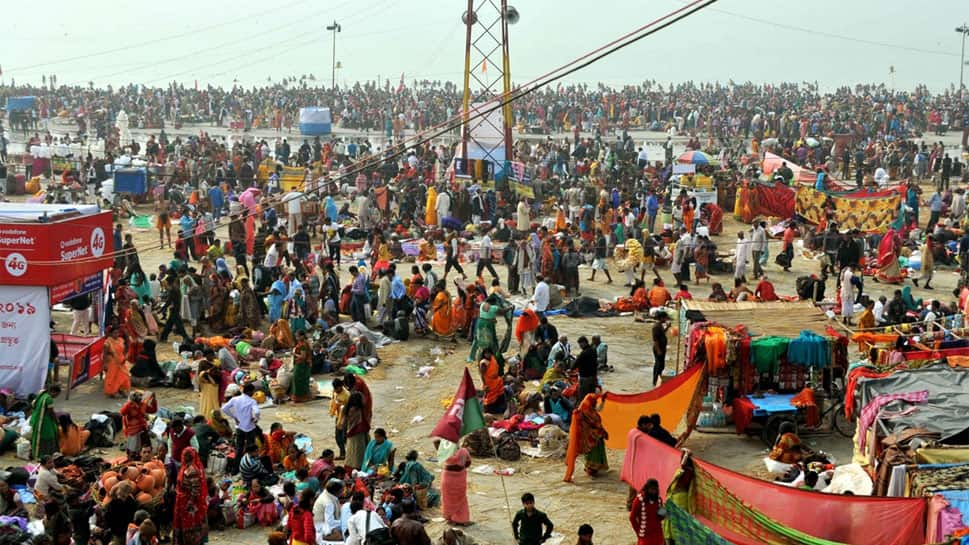 Sagar Island (West Bengal): Over three million devotees from across India and abroad, braved the icy cold water to take a holy dip in the confluence of river Ganga on Tuesday at the annual Gangasagar Fair in West Bengal`s Sagar Island on Makar Sankranti.

"Almost 31 lakh people bathed at Sagar since morning, far surpassing the attendance last year. Lakhs took the holy dip on Friday evening as well. More pilgrims have come to Sagar this year as the weather is better. We are expecting the number to go up as the day progresses," Panchayat and Public Health Engineering Minister Subrata Mukherjee told IANS.

"We have made adequate security arrangements on behalf of the state government. Temporary shelters have been built for people coming from a long distance and the elderly. We have also built close to 2000 stationary toilets for the pilgrims to keep the premises clean," he added.

About 150 km from Kolkata in the South 24 Parganas district, this island is considered auspicious by the Hindus, who gather here at this time of the year to take a holy dip at the confluence of the Ganga and the Bay of Bengal and pray by offering a coconut at the Kapil Muni temple.

The Gangasagar Mela is rated as the second largest assembly of people after the quadrennial Kumbh Mela. The devout believe that a dip in the sacred water at this time washes off sins of a lifetime.

Security arrangements have been beefed up in the area by the state government as well as the Indian Coast Guard (ICG).

Twenty drones and 800 CCTV cameras have also been deployed to keep a tab on the devotees while the ICG has placed hovercraft, high-speed patrol vessels and interceptor boats along the coastline.

"Hovercrafts are being deployed round the clock throughout the mela. The crafts being amphibious in nature facilitate smooth execution of search and rescue operation and Security Cover across the river," the North-eastern Coast Guard official said.

In addition, a life saving rapid action team comprising of rubber Gemini boats with divers are deployed during the mela to thwart off any threat of drowning to the devotees," he added.

A number of giant LED screens have been placed at different points in the area through which pilgrims would be updated about the timings and tariff of trains, buses and ferries, tide timings as well as safety precautions.