62 passengers dead, over 40 injured as train catches fire in Pakistan

The fire destroyed three of the train's carriages near the town of Rahim Yar Khan in the south of Punjab province. 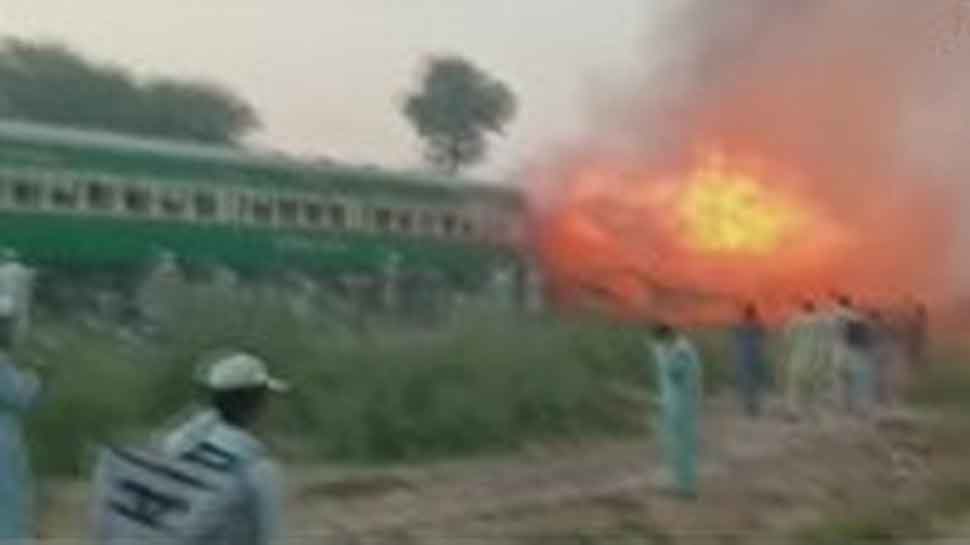 New Delhi: At least 62 persons are killed and more than 40 are injured when a train from Karachi to Rawalpindi caught fire in Pakistan's east Punjab province on Thursday. The passenger train, Tezgam, caught fire near the city area of Liaquatpur, a Pakistan Railways official confirmed. The fire was caused when a gas cylinder being carried by a passenger exploded, he said.

The fire destroyed three of the train carriages, including two economy class carriages and one business class. Pakistan Railways Minister Sheikh Rasheed said, "Two cooking stoves blew up. They were cooking, they had (cooking) oil which added fuel to fire." "Most deaths occurred when people jumped off the train," he said.

He added men from a 'Tableeghi Jammat' were travelling in the carriage where the incident occurred. "Bogies were severely damaged by the fire and they have been detached from the rest of the train," he said.

Rasheed added the fire had been extinguished and cooling efforts were underway.

According to an official, there were a total of 207 passengers in the three bogies that were completely gutted in the fire. The gruesome accident charred the bodies that made it difficult to identify the people who died in the accident. Meanwhile, the process of cooling the express train is currently underway.

Prime Minister Imran Khan while expressing his condolences directed the authorities to ensure the provision of best medical treatment for the injured.

This is the second major train accident in Pakistan this year. In July, 24 people were killed, when the Akbar Bugti Express travelling from Lahore to Quetta collided with a stationary freight train at the Walhar Railway Station in Sadiqabad Tehsil of Punjab province.