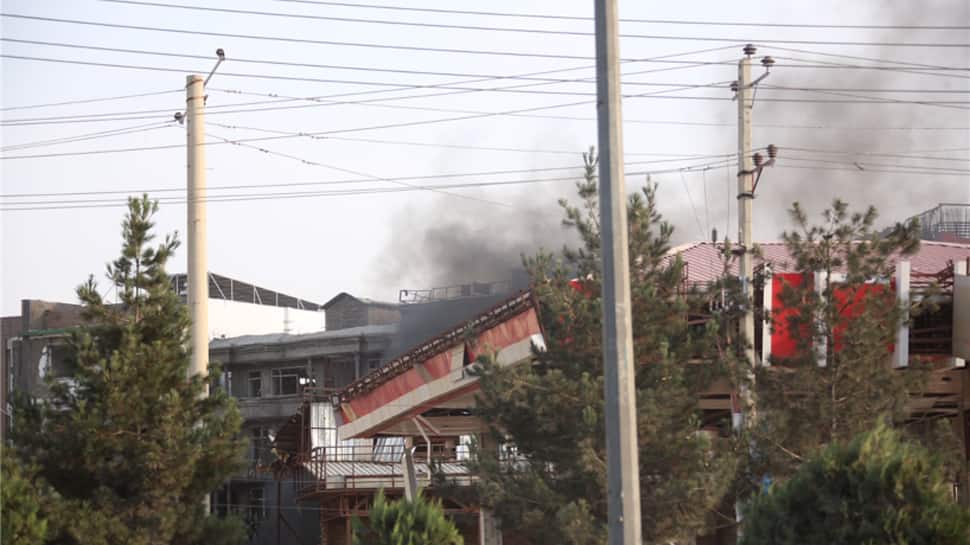 There was no immediate claim of responsibility for the attack, which came as officials have been looking ahead to an expected resumption of peace talks between the Taliban and U.S. diplomats in the coming days.

At least 25 civilians were injured in the blast on a road near the private Ghalib University, interior ministry spokesman Nasrat Rahimi said.

Immediately after the blast, gunmen stormed a nearby building belonging to vice presidential candidate Amrullah Saleh`s Afghan Green Trend Party. Saleh was wounded by shrapnel before being evacuated from the office.

Photographs shared by a government official showed Saleh sitting in a garden with blood stains on his right arm, surrounded by security guards.

Afghan soldiers killed one gunman but two others were still battling with Afghan forces in a four-storey building near the blast site, Rahimi said, adding 40 civilians had been rescued.

The attack underscored the risks facing the presidential election, which is scheduled for Sept. 28 but which has already been delayed twice this year. It follows chaotic parliamentary elections in October last year which were marred by violence and accusations of widespread fraud as well as serious organizational problems.

Full results of the October parliamentary election were only released in May, almost seven months after the ballot.

Saleh, a former Afghan spy chief turned politician, is an uncompromising opponent of the Taliban and other hardline Islamist groups. He led the country`s National Directorate of Security until 2010.

Ghani, Saleh and over a dozen other Afghan politicians, including Hanif Atmar, another former intelligence chief and Gulbuddin Hekmatyar, a former warlord in the anti-Soviet Mujahideen, launched their two-month presidential election campaign on Sunday.

The elections have become closely intertwined with the peace process although the Taliban`s refusal to talk to the Afghan government, which it considers an illegitimate foreign-imposed regime has left Ghani sidelined from the talks so far.

Ghani said in a tweet: "My brother, true son of the Afghan soil and first VP candidate of my electoral team, Amrullah Saleh has survived a complex attack by enemies of the state. We are relieved and thank the almighty that the attack has failed."

No militant group has claimed responsibility but both the Taliban and Islamic State fighters have carried out attacks in recent weeks in Kabul.

The Taliban oppose the election and in the past have attacked polling sites and warned civilians against taking part in polls funded by Western powers.

Last week, Kabul was hit by three consecutive bomb blasts claimed by Islamic State and the Taliban, killing 11 people and injuring more than 40.