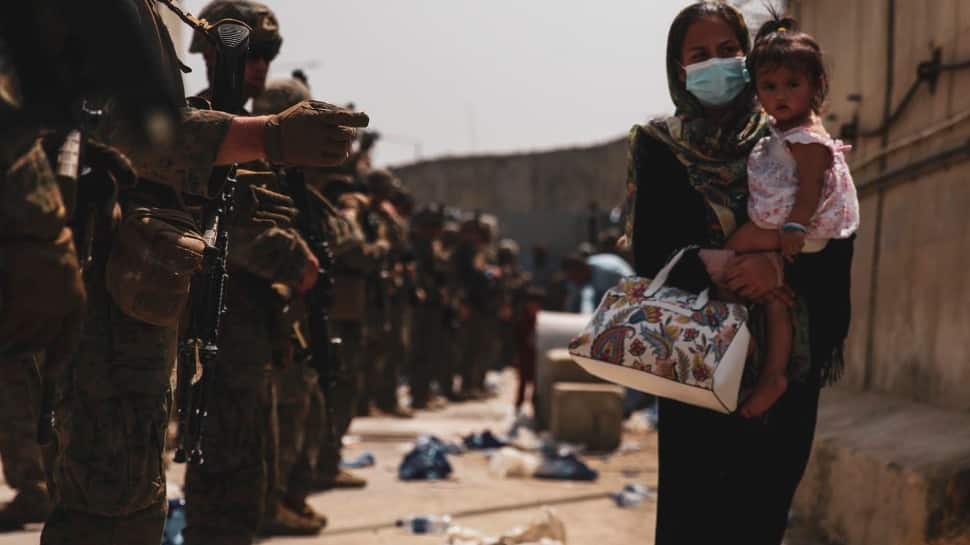 US troops guide an evacuee during an evacuation at Hamid Karzai International Airport, Kabul (Reuters photo)
Share:
Edited By:

Kabul: The chaos around Kabul's international airport saw another seven Afghan civilians killed in crowds, the British military said Sunday, showing the danger still posed to those trying to flee the Taliban's takeover of the country.

The deaths come as a new, perceived threat from the Islamic State group affiliate in Afghanistan has seen US military planes do rapid, diving combat landings at the airport surrounded by Taliban fighters.

ALSO CHECK | The Afghanistan crisis: Children at the centre of the disaster - in pics

Other aircraft have shot off flares on takeoff, an effort to confuse possible heat-seeking missiles targeting the planes.

The changes come as the US Embassy issued a new security warning Saturday telling citizens not to travel to the Kabul airport without individual instruction from a US government representative. Officials declined to provide more specifics about the IS threat but described it as significant. They said there have been no confirmed attacks as yet by the militants, who have battled the Taliban in the past.

On Sunday, the British military acknowledged the seven deaths of civilians in the crowds in Kabul.

There have been stampedes and crushing injuries in the crowds, especially as Taliban fighters fire into the air to drive away those desperate to get on any flight out of the country.

"Conditions on the ground remain extremely challenging but we are doing everything we can to manage the situation as safely and securely as possible," the Defence Ministry said in a statement.

ALSO READ | One of most difficult airlifts in history, says Joe Biden on evacuations in Afghanistan

US, Germany advise citizens against travel to Kabul airport amid evacuation chaos in Afghanistan