Police said they arrested a total of 157 people, including 67 students, over the weekend and estimated nearly 100 petrol bombs were thrown. They said eight police officers were injured. The Chinese territory is on edge on the eve of the anniversary, with authorities eager to avoid scenes that could embarrass the central government in Beijing. 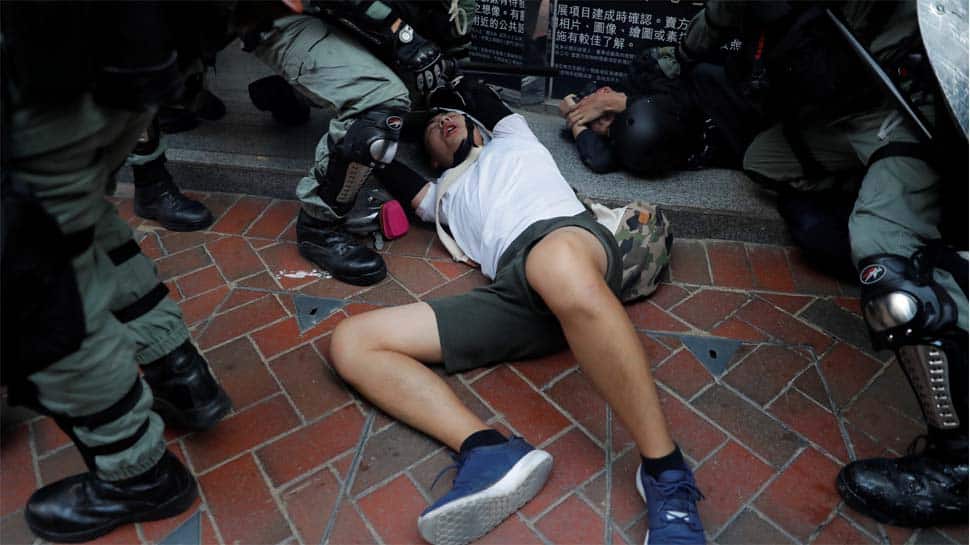 HONG KONG - Police expect more violence on Hong Kong`s streets on Tuesday, the 70th anniversary of the founding of the People`s Republic of China, after a chaotic weekend in which they fired tear gas and water cannon at protesters who set fires and threw petrol bombs.There will be a "very serious violent attack" on Tuesday, a superintendent of the police`s public relations branch, Tse Chun-chung, told a news conference on Monday.

Police said they arrested a total of 157 people, including 67 students, over the weekend and estimated nearly 100 petrol bombs were thrown. They said eight police officers were injured.

The Chinese territory is on edge on the eve of the anniversary, with authorities eager to avoid scenes that could embarrass the central government in Beijing. A huge clean-up was under way on Monday after roads, shops and buildings across the financial centre were daubed in graffiti, windows in government buildings smashed and parts of pavements uprooted by protesters during the weekend`s unrest.

Some underground stations were vandalised and streets strewn with debris from roadblocks and the charred remains of fires. Two prominent democracy activists, actor Gregory Wong and Ventus Lau, were arrested for their involvement in protests on Monday, according to a representative for the Civil Human Rights Front (CHRF), the organiser of previous mass protests.

Hong Kong police did not immediately confirm the arrests.

CHRF said on Monday authorities had rejected a permit for a march planned for Tuesday from Victoria Park in the bustling tourist district of Causeway Bay to Chater Road, next to government headquarters, based on security concerns. Protestors are expected to proceed with demonstrations across Hong Kong regardless.

The city`s leader, Carrie Lam, the focus of the unrest, made a last-minute decision to mark the People`s Republic anniversary in Beijing. The embattled leader had sent out invitations "requesting the pleasure of your company" at a flag-raising ceremony and reception in Hong Kong on Tuesday.

Security was tight around the Convention Centre where the ceremony is due to take place, with roads closed and riot police on guard. A series of strikes are planned on Monday and multiple demonstrations are scheduled on Tuesday.

It was not clear whether Lam was summoned to Beijing due to the escalation in the violence on the weekend. The government said Chief Secretary for Administration Matthew Cheung Kin-chung would stand in for her at the anniversary ceremony. The unrest over the weekend saw some of the worst and most widespread violence in more than three months of anti-government demonstrations in the Asian financial hub.

The weekend marked the fifth anniversary of the start of the "Umbrella" protests - a series of pro-democracy demonstrations in 2014 that failed to wrestle concessions from Beijing. The latest clashes began in mid-afternoon on Sunday and continued late into the night, as thousands of masked protesters roamed the streets, facing off against riot police amid plumes of tear gas and raging fires.

Protesters are angry about what they see as creeping interference by Beijing in their city`s affairs despite a promise of autonomy when British rule ended in 1997. The trigger for the protests was planned legislation, now withdrawn, that would have allowed people to be sent to mainland China for trial, despite Hong Kong having its own much-respected independent judiciary. The protests have since broadened into calls for universal suffrage.

Police said an officer fired a warning shot after they were "surrounded and attacked by a large group of violent protesters" on Sunday. By early morning on Monday, all MTR metro stations on the city`s main island were open, but staff could be seen repairing damage and clearing debris from in and around the stations.

Workers at a Starbucks store targeted by protesters were shovelling broken glass into garbage bags and peeling anti-China posters off the walls. Starbucks stores in Hong Kong are run by the Maxim`s Group, which has drawn the ire of protesters after Annie Wu, the daughter of the founder, criticised the protests during an appearance at the United Nations earlier this month.

An Indonesian journalist was hit in the eye by a rubber bullet on Sunday and was hospitalised. The Indonesian Consulate confirmed that one of its citizens had been injured.