At least 14 dead in Alabama tornado, toll expected to rise

Severe weather unleashed one of many possible tornadoes that threatened the Southern United States on Sunday afternoon. 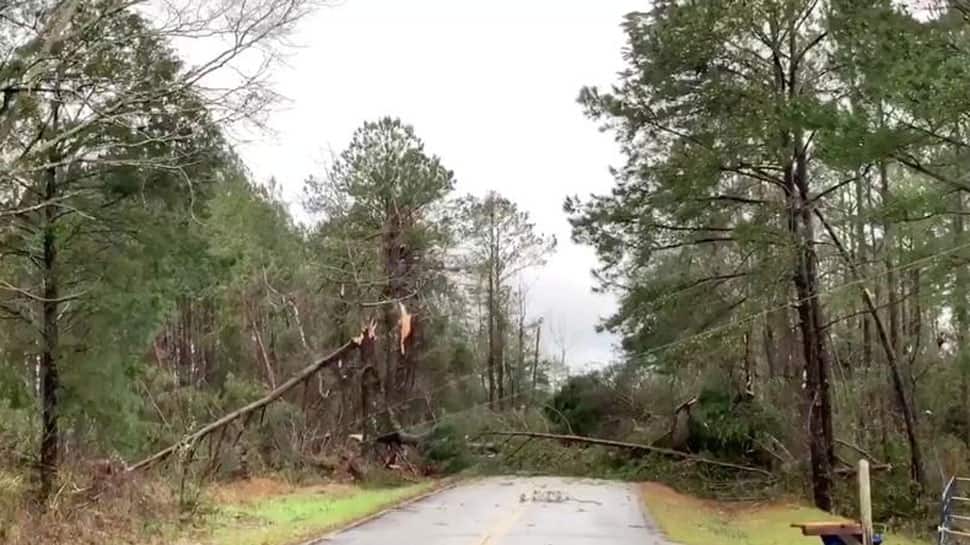 United States: At least 14 people, some of them children, died after a tornado swept through Lee County, Alabama on Sunday, and the death toll was expected to rise as rescuers searched through the rubble of destroyed homes, authorities said.

Emergency workers faced a grim night of pulling the dead and injured from the wreckage of homes and businesses. "The challenge is the sheer volume of the debris where all the homes were located," Lee County Sheriff Jay Jones said in an interview with CNN. "It`s the most I`ve seen that I can recall."

Storms, including at least one apparent tornado, uprooted trees and destroyed homes in neighboring Georgia, initially knocking out power to 21,000 customers, said Georgia Power spokeswoman Meredith Stone. That number was reduced by more than half later on Sunday evening, she said.

On Twitter, US President Donald Trump urged residents of Alabama and other areas affected by the storms to be "careful and safe." "Tornadoes and storms were truly violent and more could be coming," Trump wrote. "To the families and friends of the victims, and to the injured, God bless you all!"

In Alabama, Lee County Coroner Bill Harris said the death toll could rise. "We`ve still got people being pulled out of rubble," he told the Birmingham News newspaper early on Sunday evening. "We`re going to be here all night."

The East Alabama Medical Center in Opelika said in a statement that it was treating more than 40 patients as a result of the tornado and expected to receive more. Some patients had been sent to other hospitals, it added.

Severe weather unleashed one of many possible tornadoes that threatened the Southern United States on Sunday afternoon. Tornado warnings and watches were in effect for parts of Georgia and Alabama through Sunday evening.

Video footage from the small community of Beauregard in Lee County showed homes reduced to piles of wreckage, felled trees, and debris from blasted buildings scattered across roads. Photos posted on social media from a highway near Smiths Station, about 20 miles (32 km) east of Beauregard, showed a large bar called the Buck Wild Saloon with its roof torn off and missing most of a wall after the storm swept through.

Alabama Governor Kay Ivey warned residents on Twitter that more severe weather might be on the way. She said the state was working to help families who had been affected. "Our hearts go out to those who lost their lives in the storms that hit Lee County today," Ivey wrote. "Praying for their families & everyone whose homes or businesses were affected."

A state of emergency for Alabama, issued on Feb. 23 to deal with flooding, would be extended, she said.

Lee County Schools announced on Twitter that campuses in the county would be closed on Monday. The National Weather Service office in Birmingham, Alabama, said it was sending three survey teams out on Monday to assess damage in Autauga, Macon, Lee and Barbour counties.

"Please stay out of damaged areas so first responders can do their job," the NWS office said on Twitter. The storm initially left 17,000 customers without power in Alabama, but crews were able to reduce that number to 6,000 by about 9 p.m. EST on Sunday, said Michael Sznajderman, spokesman for the utility Alabama Power.

As thousands faced a night without power, temperatures looked set to fall to near freezing following the storm. "Colder air will sweep into the Southeast behind the severe weather with temperatures dropping into the 30s (1 C) southward to central Georgia and across most of Alabama by Monday morning," AccuWeather meteorologist Kristina Pydynowski said.

"Those without power who rely on electric heat need to find ways to stay warm," she added.