Nearly 1,800 people were injured nationwide, according to medical sources, as demonstrators vented frustration at political elites they say have failed to improve their lives after years of conflict. "All we want are four things: jobs, water, electricity, and safety. That`s all we want," said 16-year-old Ali Mohammed who had covered his face with a T-shirt to avoid inhaling tear gas, as chaotic scenes overwhelmed Baghdad`s central Tahrir Square. 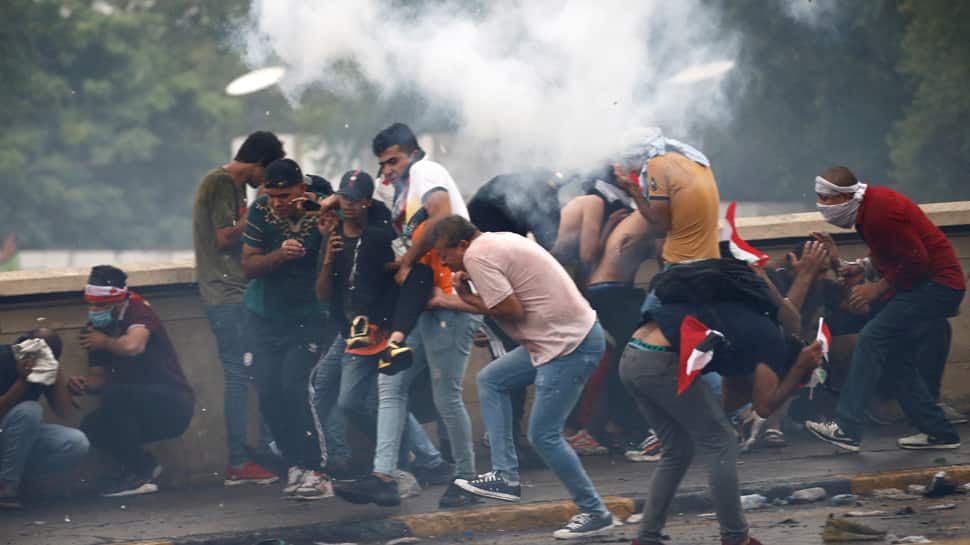 BAGHDAD: At least 25 protesters were killed in Iraq on Friday when security forces used tear gas and an Iranian-backed militia opened fire to try to quell renewed demonstrations against corruption and economic hardship, security sources said. A government intelligence officer and a member of the powerful Asaib Ahl al-Haq militia were killed in a clash with protesters in the southern city of Amara, police sources said.

Nearly 1,800 people were injured nationwide, according to medical sources, as demonstrators vented frustration at political elites they say have failed to improve their lives after years of conflict. "All we want are four things: jobs, water, electricity, and safety. That`s all we want," said 16-year-old Ali Mohammed who had covered his face with a T-shirt to avoid inhaling tear gas, as chaotic scenes overwhelmed Baghdad`s central Tahrir Square.

Sirens wailed and tear gas canisters landed amid groups of young protesters draped in Iraqi flags and chanting "with life and blood we defend you Iraq." The bloodshed is the second major bout of violence this month. A series of clashes two weeks ago between protesters and security forces left 157 people dead and over 6,000 wounded.

The unrest has broken nearly two years of relative stability in Iraq, which lived through foreign occupation, civil war and an Islamic State (IS) insurgency between 2003 and 2017. It is the biggest challenge to security since IS was declared beaten. On Friday, eight protesters were killed in Baghdad, the Iraqi Human Rights Commission said. At least five of them were protesters struck by tear gas canisters, security sources said.

Interior Ministry spokesman Khalid al-Muhanna said at least 68 members of the security forces were injured. The sometimes violent demonstrations erupted in Baghdad on Oct. 1 and spread to southern cities. They pose the biggest challenge to Prime Minister Adel Abdul Mahdi since he took office just a year ago. Despite promising reforms and ordering a broad cabinet reshuffle, he has so far struggled to address the protesters` discontent.

Despite the OPEC member country`s vast oil wealth, many Iraqis live in poverty, have limited access to clean water, electricity, basic healthcare or decent education as the country tries to recover from years of conflict and economic hardship. Many Iraqis view the elite as subservient to one or other of Iraq`s two main allies, the United States and Iran. Many suspect these powers use Iraq to pursue their struggle for regional influence via proxies unconcerned with ordinary people`s needs.

In Basra, Reuters footage showed protesters clashing with security forces who launched tear gas canisters and stun grenades and were met by rocks thrown at their vehicles. Young men carried the injured away, as protesters set police cars on fire. An 8 p.m. curfew was imposed until further notice in the southern provinces of Basra, Muthanna, Wasit, Babel and Dhi Qar, after protesters torched offices of lawmakers, Shi`ite political parties and militia headquarters. How the government and security forces handled Friday`s planned protests had been seen as a litmus test for the stability of the country with political leaders already on edge.

RAGE AGAINST THE ELITE

In a Thursday night address, Abdul Mahdi stressed that violence would not be tolerated and warned that any collapse of the government would drag Iraq into further turmoil. Iraq`s top Shi`ite cleric, Grand Ayatollah Ali al-Sistani, who in recent weeks criticised the government`s handling of the protests, urged calm on all sides during his sermon on Friday.

In Baghdad, many demonstrators initially believed authorities would refrain from violence after security forces killed dozens of protesters earlier this month. Hundreds tried throughout the day to march into the city`s fortified Green Zone, which houses government buildings and foreign embassies, when they were stopped by security forces. By afternoon, the mood had shifted with thousands of angry protesters wrapped in Iraqi flags under pouring rain, chanting that they were peaceful and calling political leaders corrupt. As clashes broke out, tuk-tuks carried the injured to hospitals. Medical sources told Reuters hundreds of people had been treated for injuries, most related to tear gas exposure.