At least 32 killed in air strikes in rebel-held city in Syria, say rescuers

Air strikes on a popular market and residential neighbourhoods killed at least 32 people and wounded dozens on Monday in an attack on one of the main opposition-held cities in northwestern Syria, rescuers and residents said. 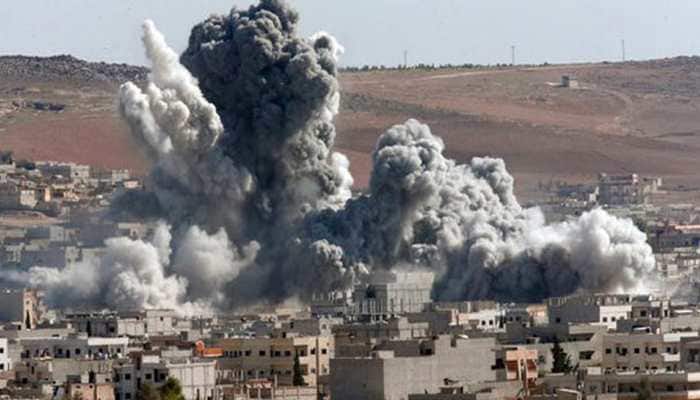 Image used for representational purpose only
Share:
Edited By:

AMMAN: Air strikes on a popular market and residential neighbourhoods killed at least 32 people and wounded dozens on Monday in an attack on one of the main opposition-held cities in northwestern Syria, rescuers and residents said.

The raids, believed to be carried out by either Syrian or Russian jets, targeted Maarat al-Numan, a densely populated city in the south of Idlib province, leaving a trail of destruction and carnage, they said.

"Bodies are lying on the streets. May God take revenge on (Russian President Vladimir) Putin and (Syrian President Bashar al-Assad) for their crimes," Abdul Rahman al-Yasser, a rescuer from Idlib`s civil defence team, told Reuters. He was searching for bodies under the rubble.

Busy marketplaces and residential areas have been frequently targeted during a campaign waged by Syria and Russia since the end of April. Assaults on civilian areas have killed hundreds, rescuers say. Airstrikes killed another six people in the town of Saraqeb on Monday.

Russia`s Ministry of Defence on Monday denied its planes had carried out the latest air strikes, saying they had not flown any missions in Idlib.  Allegations of Russian involvement were "a fake" pushed by the White Helmets rescue workers, it said in a statement.

Syrian state media reported that several people had been injured by shells fired by rebels near the insurgent enclave. Residents said escalating strikes on urban centres have triggered a new wave of displacement towards the relative safety of the border area with Turkey.

The offensive has so far failed to make major inroads into rebel territory in Hama and Idlib provinces, where mainstream rebels backed by Turkey alongside jihadist fighters are putting up fierce resistance in their last remaining bastion.

Turkey, which reached an accord last September with Russia to contain the fighting and is seen by many civilians in opposition areas as a protector, said Moscow should pressure its Syrian ally to halt the bombing.

Russia and the Syrian army deny allegations of indiscriminate bombing of civilian areas and say they are fighting al-Qaeda-inspired Islamist militants. The United Nations estimates at least 330,000 people have been uprooted since the offensive began.