"We expect that the PM's visit to India will further enhance the bilateral relations. We will discuss a framework agreement on the Teesta and seven other common rivers", Bangladeshi Foreign Minister A K Abdul Momen was quoted as saying by the Bangladeshi media. 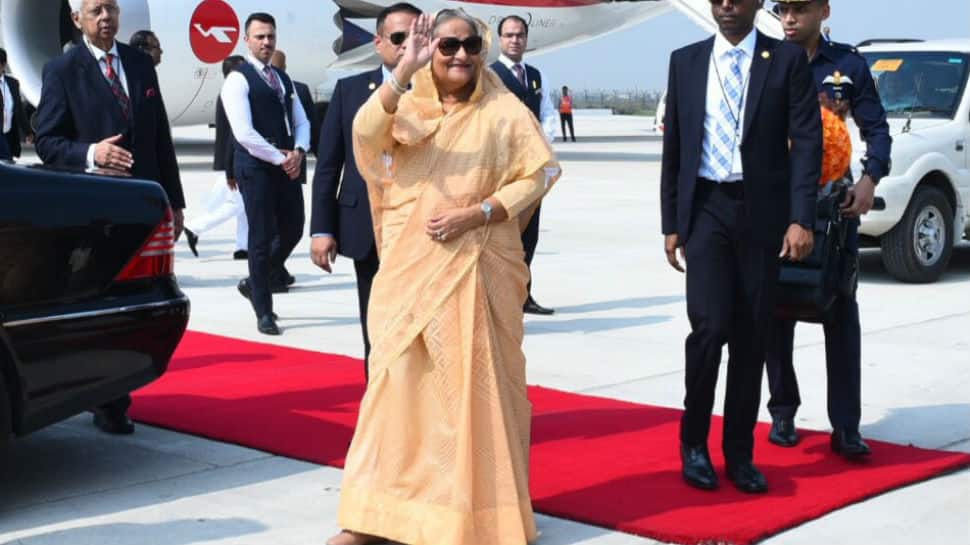 New Delhi: Bangladesh Prime Minister Sheikh Hasina arrived in India on Thursday on her four-day visit, the first since her landslide victory in December of 2018.

During her visit, around a dozen of bilateral agreements will be signed and focus will be on increasing bilateral cooperation, including discussing a number of issues like Teesta, Rohingya issue & NRC.

A relationship of utmost priority

"We expect that the PM's visit to India will further enhance the bilateral relations. We will discuss a framework agreement on the Teesta and seven other common rivers", Bangladeshi Foreign Minister A K Abdul Momen was quoted as saying by the Bangladeshi media.

On the Rohingya issue, Momen said, "If the Rohingya crisis prolongs, there may be pockets of radicalisation. We want to convey this message to India."

The NRC or citizens register development in Assam will also be raised. Of which, Momen said, "We have trust in what the Indian authorities told us. Yet, we will raise the issue."

Prime Minister Narendra Modi and External Affairs Minister (EAM) S Jaishankar have already assured Bangladesh that the developments in Assam and will not impact Dhaka.

Saturday will be the main day of engagement with PM Modi holding bilateral talks with his Bangladesh counterpart and calling on President Ram Nath Kovind. The two prime ministers will jointly inaugurate three bilateral projects via video link.

Hasina is the chief guest at the India Economic Summit organised by the World Economic Forum (WEF) on October 3 and 4.

Hasina will also meet Congress president Sonia Gandhi and filmmaker Shyam Benegal, the director of the joint India-Bangladesh film which is being planned on the Father of Nation of Bangladesh Bangabandhu Sheikh Mujibur Rahman.

The visit comes a week after PM Modi met Hasina in New York on the sidelines of United Nations General Assembly (UNGA).

A statement issued by the Ministry of External Affairs said, "The two leaders reviewed the excellent state of bilateral relations and cooperation, and agreed to maintain the momentum to take the India-Bangladesh relationship to new heights".

Both the leaders "reiterated their zero-tolerance approach to terrorism and violent extremism" and "agreed that a strong partnership in security had built trust and mutual confidence between the two countries."

Hasina also participated in the special commemorative event organised by India to mark the 150th anniversary of the birth of Mahatma Gandhi at the United Nations last Tuesday.

There has been a number of high-level engagements between the two countries. PM Modi visited the country in 2015, it was followed by Hasina's India visit in 2016 for BRICS-BIMSTEC summit in 2016 and state visit in 2017. She again visited India in 2018 for the joint inauguration of Bangladesh Bhaban at Santiniketan University. During her visit, she was awarded a Doctor of Literature (D.Lit) by Kazi Nazrul University, Asansol.

PM Modi was one of the first global leaders to congratulate PM Hasina for her election victory on December 30, 2018. Last month EAM Jaishankar visited the country and met the top leadership.

Support for India in US Congress 'always bipartisan': Nancy Pelosi