Bangladesh violence: Key suspect held for triggering attacks on Hindus, to be probed by security agencies

Prime suspect Iqbal Hossain is accused of keeping the Holy Quran at a Durga Puja venue, triggering violence in Comilla and other places. 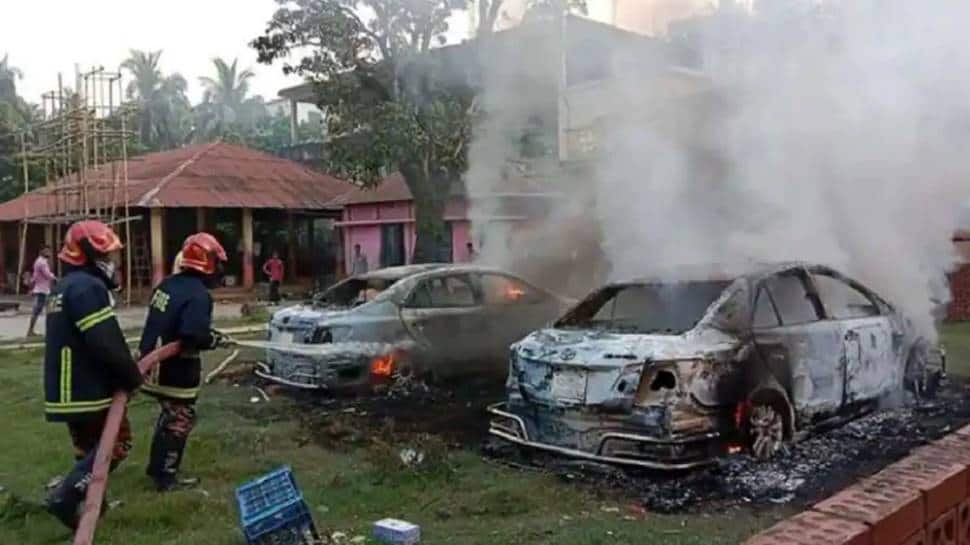 Dhaka: A 35-year-old Bangladeshi man, the key suspect who was arrested overnight in connection with a slew of violence against Hindus and mob attacks on temples in the country during Durga Puja festivities, would be interrogated by security agencies, police said on Friday.

Iqbal Hossain was arrested from Cox's Bazar sea beach area on Thursday night after a massive hunt and is suspected to be the one who placed a copy of the Quran at a Durga Puja venue in Cumilla, some 100 km southeast of Dhaka.

Attacks on Hindu temples have been reported in Bangladesh since last Wednesday after an alleged blasphemous post surfaced on social media during the Durga Puja celebrations.

On late Sunday night, a mob damaged 66 houses and set on fire at least 20 homes of Hindus in Bangladesh.

"We have arrested (eastern) Cumilla's Iqbal Hossain, who is the key suspect of the one week's of widespread communal unrest from the Cox's Bazar beach," a police headquarters spokesman said.

He added that police and other security and intelligence agencies would now interrogate Hossain, whom the police earlier described as a "vagabond".

TV footage showed Hossain was brought under heavy security escorts from Cox's Bazar to Cumilla by road while officials said after initial interrogation he would be produced before a court seeking him to be placed under police remand for next several days.

"We expect the court to order him to be remanded in our custody when several other security and intelligence agencies would interrogate him as well," another police officer in Cumilla said.

The violence erupted on October 13 after a copy of Islam's holy book of Quran was found at the feet of a Hindu goddess in Cumilla ahead of the Hindu community's Durga Puja.

Social media was widely used to spread the unrest, forcing authorities to briefly suspend Facebook and internet connectivity to contain the violence.

Police said they had launched a massive manhunt for Hossain based on the clue from the security camera footage at the Cumilla's puja pavilion.

Their initial investigations indicated he was a vagabond while family members claimed he was a mentally imbalanced person. However, police said even if the claim was true some vested quarters could have used him to instigate the violence.

"This could not be mere a task of a vagabond; somebody is definitely there behind the incident to instigate the attacks," Hindu rights activist Rana Dasgupta said.

Local media reported that six Hindus were killed in separate attacks, but the figures could not be confirmed independently.

The attacks on the Hindus have been condemned by the United Nations.

Mia Seppo, the UN's resident coordinator in Bangladesh, said in a Twitter post on Monday that the attacks on Hindus are against the values of the Bangladesh constitution and need to stop.

On Monday, the Ministry of Home Affairs transferred seven police officials from troubled areas for failing to control the violence.

On Tuesday, Bangladesh Prime Minister Sheikh Hasina instructed her home minister to initiate immediate action against those who incited violence using religion as she asked the people not to trust anything on social media without fact-checking.

Hasina earlier promised to expose perpetrators of violence to stern punitive actions while police said nearly 600 suspected temple attackers were arrested so far in different parts of the country and a manhunt was underway to track down more.

The Foreign Ministry in a statement underlined that the Government of Bangladesh "unequivocally condemned those incidents and took serious note of the reactions from within and outside the Hindu community.

Hindus make up some 10 per cent of the Muslim-majority Bangladesh's 169 million population.

No compromise on Taiwan: China warns US after Biden comments