Sharif, 69, has been imprisoned at the high security Kot Lakhpat jail since December 2018 following his conviction in a corruption case. 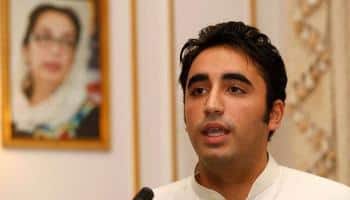 Sharif, 69, has been imprisoned at the high security Kot Lakhpat jail since December 2018 following his conviction in a corruption case.

Pakistan Peoples Party chairman Bilawal's meeting with Sharif is being seen by political observers as a step to form a major opposition alliance against the Imran Khan in days to come.

After the meeting, Bilawal told reporters outside the jail that he came to inquire after Sharif's health.

"Although there are political differences but Mr Sharif is not well and I have come here to see him and inquire after his health. Mr Sharif looked very unwell.

"I demand the government provide him best treatment. He should be given treatment according to his wish. Injustice shouldn't be done to him," Bilawal, 30, said.

He said it is difficult to defend the country on human rights if best treatment is not accorded to a three-time prime minister.

"It is our failure that the chartered of democracy couldn't be implemented in letter and spirit. We need to devise a new charter in this regard," he said.

He said: "I hope Nawaz Sharif will not strike a deal and stay determined. I didn't take any impression that he was keen to go to London for treatment."
Sharif is serving a seven year imprisonment in Al-Azizia Steel Mills corruption case, one of the three graft cases filed by the National Accountability Bureau on the orders of the Supreme Court.

Prime Minister Khan on Saturday asked Punjab Chief Minister Usman Buzdar to ensure that every health facility in the country is made available for Nawaz to get the treatment of his choice.

When asked about a joint political alliance against the PTI government in the wake of Bilawal's meeting with Sharif, Qureshi said: "It is very much on the card as the honeymoon period of the Imran Khan government is over and the Opposition will be seen united against this government that has brought miseries to the people of Pakistan."