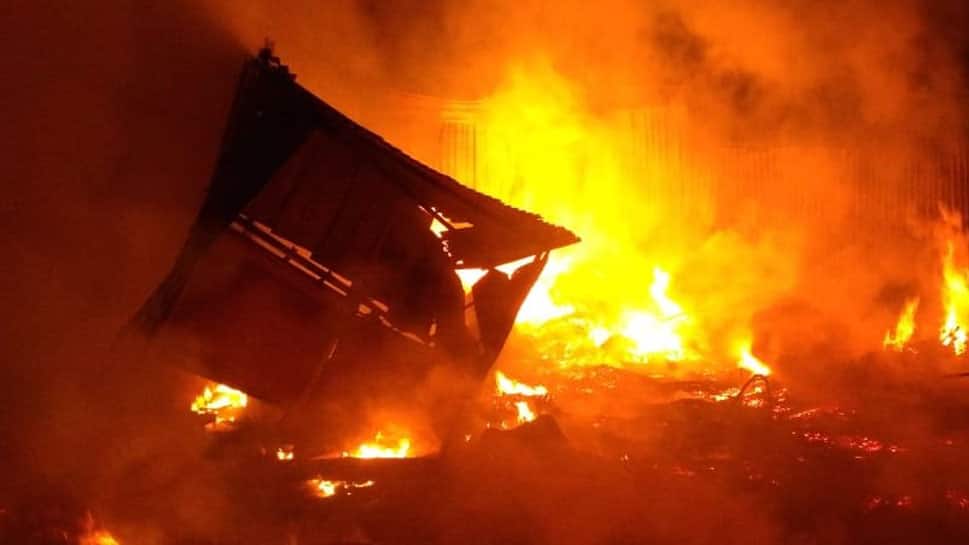 A fire swept through the training center and lodgings of Rio de Janeiro soccer club Flamengo on Friday, killing 10 people, including members of the club`s youth team, firefighters and news reports said.
At least three youths aged 14 and 15 were injured in the blaze. All three were taken to the hospital, one of them reportedly in serious condition.
Firefighters said they arrived at the Ninho do Urubu, a state-of-the-art training center that was expanded and opened only two months ago, shortly after 5 a.m. (0700 GMT) to find the building engulfed in flames.
Some people had managed to escape, but the ferocity of the blaze prevented firefighters from entering the facility.
"We managed to rescue the victims that were outside," fire service Lieutenant Colonel Douglas Henaut told reporters. "The place was completely overtaken by fire. As much as we tried to get inside and find people still alive that wasn`t (possible) ... We only found bodies inside."
"We can`t tell you the cause of the fire, that needs to be investigated," he added.
Flamengo president Rodolfo Landim called it "the biggest tragedy in Flamengo`s 123-year history" but gave no details about the players involved.
News reports said the fire happened in one of the older parts of the facility that was due to be torn down. It was not known whether smoke alarms were installed in the rooms.
O Globo newspaper reported the building did not have the correct permits but did not cite sources.
One young player said the fire started in his room.
"The air conditioner caught fire, and I ran out," said Felipe Cardoso, a midfielder with the under-17 side. "Thank God I managed to run and I`m still alive."
O Globo identified at least six of the dead as youth players but the only one named by a club official was Christian Esmerio, a 15-year-old goalkeeper.
"I had the pleasure of knowing you, unfortunately an accident interrupted your dream," Gabriel Batista, a senior goalkeeper at the club, wrote on Instagram.
EXPANDED NEW FACILITY
It is common for Brazilian clubs to host young players in dormitories while they are training with youth teams or at the club for trials, especially those from poor backgrounds or from outside the city.
However, many of the lodgings have a reputation for poor health and hygiene standards. In recent years, major clubs such as Vasco da Gama, Botafogo and Parana have hit the headlines due to the precarious conditions of their training centers.
After years of financial difficulties, Flamengo last year spent 23 million reais ($6.2 million) to expand the Ninho do Urubu training ground on the edge of the city, and it was being used both by the first team and youth squads.
In addition to accommodation for young players, the facilities include several pitches, an aquatic park, a gym, a medical center and a mini-stadium.
The Ninho do Urubu, or Vulture`s Nest, gets its name from the club`s symbol, which is a vulture.
Several of the club’s best-known young talents trained there, including midfielder Lucas Paqueta, who made his debut for AC Milan in January, and Vinicius Junior, who joined Real Madrid last year.
"What sad News! Praying for everyone! Strength, strength, strength," Junior wrote on Twitter.
The fire follows days of heavy rains that hit the city and claimed at least six lives. The rains led Flamengo to close parts of its social club and cancel regular training sessions it organizes for children.

WORLD CHAMPIONS
Flamengo, where World Cup players such as Zico, Junior and Leonardo got their start, is one of the best-supported clubs in Brazil and is famous around the world. Known by fans as the Red-and-Black, they won the Copa Libertadores, South America`s version of the Champions League, in 1981 and lifted the Intercontinental Cup a few months later.
Zico, who was outside of Brazil, wrote on Instagram: "What a shock getting this news here on the other side of the world." "May the Red-and-Black nation have strength and faith to get through this moment," the former Brazil midfielder wrote.
Teams from around the world, including Rio rivals Botafogo, Fluminense and Vasco da Gama, tweeted their solidarity and offered help that included psychologists and medical staff.
Officials postponed Saturday`s two semifinals of the Guanabara Cup, one of which was between Flamengo and Fluminense at the famous Maracana stadium, host of the 2014 World Cup final.