An Indian-origin Sikh billionaire in the UK, dubbed as the "British Bill Gates", has been making waves on social media with his vast fleet of luxury Rolls Royce cars. 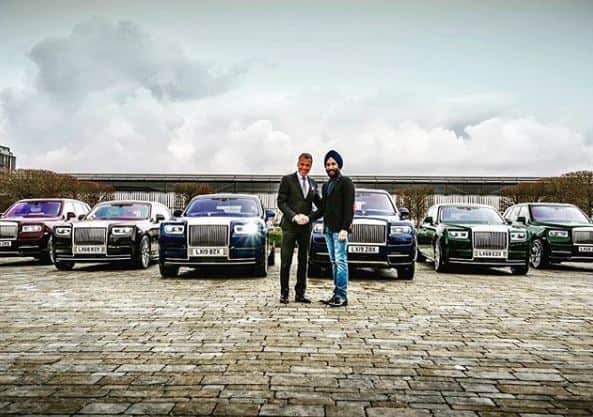 LONDON: An Indian-origin Sikh billionaire in the UK, dubbed as the "British Bill Gates", has been making waves on social media with his vast fleet of luxury Rolls Royce cars.

Reuben Singh, the London-based CEO of alldayPA and Isher Capital, posted a series of images of himself posing with his wide range of luxury cars ? six of which were bought recently.

In 2000, The Sunday Times branded him the "British Bill Gates" with an estimated net worth of 80 million pounds (USD 103 million).

"The Jewels Collection. Rubies, Sapphires & Emeralds. It's ok to be a little obsessed with jewellery as jewellery is like ice cream, 'there is always a little room for more'," the 42-year-old said in his Instagram post with a latest set of Rolls Royce.

The new fleet bought by the car enthusiast includes three Rolls Royce Phantoms and three Rolls Royce Cullinans. The name 'Jewels Collection' comes from the bespoke colours he has chosen for the brand-new models.

The latest set of images follow his so-called 'turban challenge' last year, a charity initiative to match the colour of his turban with his Rolls Royce. It followed a throwaway remark which Singh decided to take on as a wager.

"Thanks Simon, I'll take you up on the 7 day 'Rolls Royce Turban Challenge' ? 7 days, 7 different Turbans, 7 Rolls Royces. 2 rules: The colour of the Rolls Royce has to match/contrast my Turban & the cars have to be mine. Raising thousands a day for charity on this bet. With blessings of the Almighty," he posted on Instagram before he went on to complete the challenge.

He set up his first business at the age of 19 ? fashion accessories retail chain 'Miss Attitude' and went on to sell the company to create alldayPA, billed as a high-quality UK-based call handling and telephone answering service.

"By early 2005, my fortunes had changed dramatically. Looking back this fall was inevitable due to some of the mistakes that had been made. I ignored correct advice and chose to take incorrect advice," he notes, in reference to the ups and downs of his career.

"As the CEO of Isher Capital and alldayPA.Com, I have the ability to work with and on a variety of different businesses each day. AlldayPA is a passion of mine that I founded 19 years ago and Isher Capital is an investment company that allows me to work with Entrepreneurs and fast growing businesses," Singh said.

He attributes much of his success to his Sikh faith, saying he tries to incorporate much of the teachings of his religion into his businesses.