In order to ease the tensions, China has maintained close communication with both India and Pakistan. 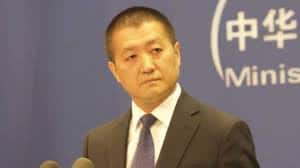 Beijing: China on Monday kept mum on Pakistan Foreign Minister Shah Mehmood Qureshi's claim that Beijing plans to send a special envoy to Pakistan and India to ease tensions following the Pulwama terror attack, but said the two countries can resolve their differences through friendly negotiations.

Pakistani media on March 2 quoted Qureshi as saying that China has decided to send a special envoy to Pakistan and India in a bid to reduce the tensions in the region. Asked about Qureshi's reported remarks, Chinese Foreign Ministry spokesman Lu Kang said, As to your question, like we said before, we really hope India and Pakistan, both important countries in South Asia, can resolve the relevant issues through friendly consultations and negotiations."

In order to ease the tensions, China has maintained close communication with both India and Pakistan. Whatever is conducive to regional peace and stability, China will try to do that, and we will continue to do so," Lu said, without referring to any plans to send a special envoy.

To a related question whether China is ready to play a mediation role between India and Pakistan as Russian Foreign Minister Sergey Lavrov said Russia is also ready for it, Lu said, ?We welcome all the efforts that are conducive to easing tensions and promoting peace and stability in this region."

Actually, we have been in close contact with both India and Pakistan, and we will continue to do so and to play a conducive role," he said. India maintains that Kashmir is a bilateral issue and there is no need for any third party mediation.

To another question about the reported remarks by Lavrov that Counter-Terrorism Mechanism under the Shanghai Cooperation Organisation (SCO) could be a forum where the India-Pakistan issues could be discussed, Lu said ?I also saw the reports that Lavrov said the SCO mechanism could be used to ease the tensions.

We encourage anything as long as it is conducive to promoting the peace and stability in this region and easing tensions. We will encourage anything to this end," he said. Russian news agency TASS reported on March 1 quoting Russian Foreign Ministry that Lavrov had a telephonic conversation with Qureshi on India-Pakistan tensions.

"Russia stressed the need for all countries to observe a provision on universal counter-terrorism conventions and cooperate for their implementation," the Foreign Ministry said, noting the possibility of using for these goals the mechanism of the Regional Anti-Terrorist Structure of the SCO, the TASS report said.

At the RIC Ministers meeting, India won the support of China and Russia in the fight against terrorism as Beijing and Moscow had agreed to step up policy coordination in this regard. Briefing media after the RIC Ministers talks, Wang said, We agreed to jointly combat all forms terrorism through closer policy coordination and practical cooperation. Especially important is to eradicate the breeding grounds of terrorism and extremism."

But at the same time Wang tried to strike a balance highlighting that Pakistan, which is Beijing's close ally, is also opposed to terrorism. China, Russia and India have reaffirmed our strong opposition to terrorism in various forms and manifestations. At the same time, we believe that Pakistan has always been opposed to terrorism," Wang had said at the joint press conference with Swaraj and Russian Foreign Minister Sergei Lavrov.

Elaborating on China's stand, Wang said, "on the recent developments between India and Pakistan, China appreciates the statements from Indian and Pakistani friends saying that they will exercise and avoid escalation of the situation.