The coronavirus COVID-19 pandemic has infected over 700,000 people globally while more than 33,500 have died, some 1,48,000 people have reportedly been cured, as per Johns Hopkins University at 11.30 on Sunday (March 29,2020). The United States continues to be the worst affected nation after Italy, Spain and China with the most infections, while Europe continues to report the most number of deaths. 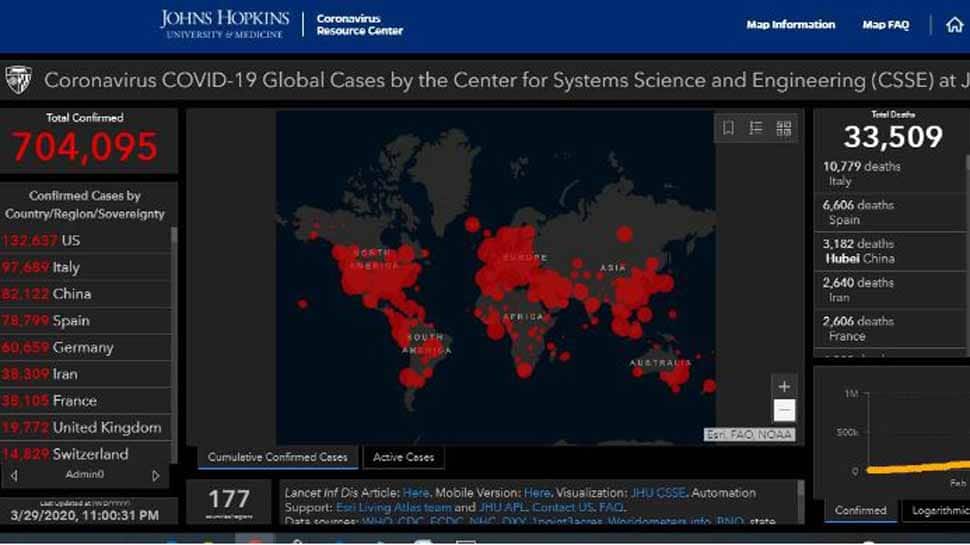 The coronavirus COVID-19 pandemic has infected over 700,000 people globally while more than 33,500 have died, some 1,48,000 people have reportedly been cured, as per Johns Hopkins University at 11.30 on Sunday (March 29,2020). The United States continues to be the worst affected nation after Italy, Spain and China with the most infections, while Europe continues to report the most number of deaths.

In US, the number of COVID-19 cases are 1,32,637 making it the new epicentre of the disease. New York has been the most affected state in the US saw an increase of 237 deaths in the past day, reaching a total of 965 since the outbreak began, the governor of New York state Andrew Cuomo said on Sunday.

The state has also reported 7,195 new confirmed coronavirus cases in the past day for a total of 59,513, Cuomo told a news conference, as per a report by Reuters. Another 1,175 people were hospitalised in the past day, increasing the total to more than 8,500 hospitalisations in the state, including more than 2,000 in intensive care, Cuomo said.

While, in Italy's Lombardy, the epicentre of Italy`s contagion, the death toll has risen by around 416 in a day to some 6,360, a source familiar with the data said on Sunday, reported Reuters. Italy has suffered the most deaths from the virus epidemic and was the first Western country to introduce severe restrictions on movement after uncovering the outbreak just over five weeks ago.

The government will "inevitably" extend the containment measures it had approved to stem the coronavirus outbreak in the country beyond April 3, the regional affairs minister said. The nationwide tally stood at 10,779, the highest in the world with 97,689 infections.

Second only to Italy in fatalities, Spain also saw infections rise to 78,799 from 72,248 the day before. The Mediterranean country of Spain prepares to enter its third week under near-total lockdown on Sunday, as the government met to approve a strengthening of measures and the coronavirus death toll rose by a record 838 cases overnight to 6,528.

Prime Minister Pedro Sanchez, in a televised address to the nation on Saturday night, announced that all non-essential workers must stay at home for two weeks, the latest government measure in the fight against coronavirus. Schools, bars, restaurants and shops selling non-essential items have been shut since March 14 and most of the population is house-bound as Spain tries to curb the virus.

Meanwhile, in China a growing number of imported coronavirus cases risks fanning a second wave of infections when domestic transmissions had "basically been stopped", a senior health official said on Sunday, while eased travel curbs may also add to domestic risks. China has so far reported 82,122 cases of infections and 3,182 deaths.

Most of those imported cases involve Chinese nationals returning home from abroad.