Donald Trump agrees on keeping US troops in Syria

The White House on February 21 announced that the US would leave about 200 troops in Syria after the planned pullout. 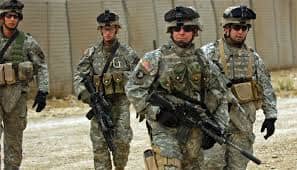 Washington: US President Donald Trump has responded to lawmakers that he fully agrees on keeping US forces in Syria, the media reported. A bipartisan group of Senators and Representatives wrote to Trump on February 22, praising his decision to keep a small group of troops in Syria as a stabilising force.

A copy of the letter obtained by NBC News showed on Tuesday that Trump highlighted a paragraph about the objectives of US continued presence in Syria. "I agree 100%. ALL is being done," Trump wrote on the letter with his signature, Xinhua reported.

The White House on February 21 announced that the US would leave about 200 troops in Syria after the planned pullout. Trump confirmed the next day that a small fraction of US forces would remain in Syria with troops from other countries.

Citing a senior administration official, the media later reported that the US military would leave about 400 troops in two different regions of Syria.

According to the official, half of them would join the multinational force of roughly 800 to 1,500 troops deployed in northeastern Syria to maintain a buffer between Turkey and US-backed Kurdish forces. The rest 200 troops would stay at its base in al-Tanf, near the Syrian border with Iraq and Jordan.

General Joseph Votel, commander of the US Central Command, told the media last month that the US would likely start to withdraw its troops from Syria in the coming weeks. Currently, there are about 2,000 US troops deployed in Syria.

Declaring victory over the Islamic State, Trump last December announced the withdrawal of US troops from Syria, leading to the resignation of then US Secretary of Defence James Mattis.