Trump announced the move five days after he surprised many in Washington by making the conservative Republican lawmaker from Texas his selection to replace Daniel Coats as director of national intelligence, a post that oversees the 17 U.S. civilian and military intelligence agencies including the CIA. 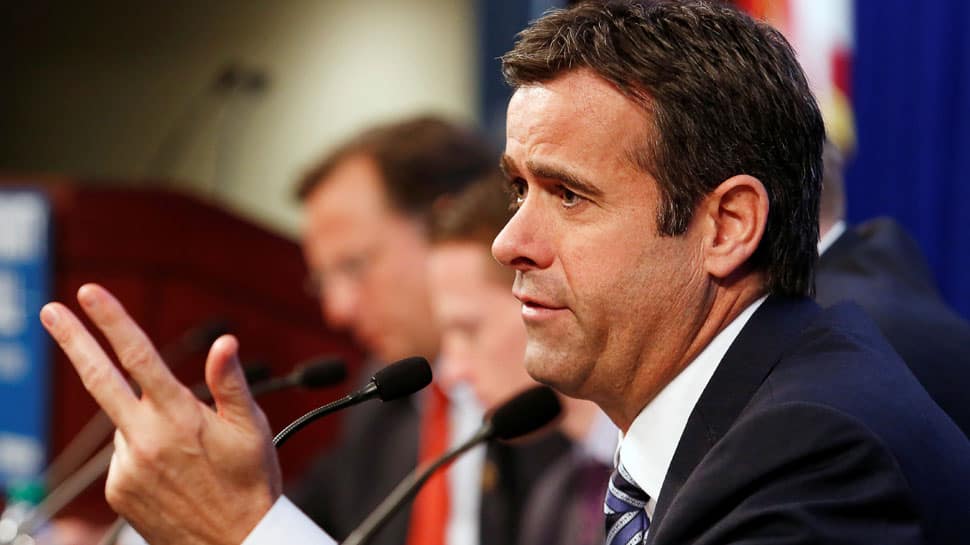 WASHINGTON: US President Donald Trump on Friday dropped his choice of John Ratcliffe to be US spy chief after questions arose about the congressman`s lack of experience and possible exaggerations in his resume, marking the latest upheaval over a top national security post.

Trump announced the move five days after he surprised many in Washington by making the conservative Republican lawmaker from Texas his selection to replace Daniel Coats as director of national intelligence, a post that oversees the 17 U.S. civilian and military intelligence agencies including the CIA.

Trump told reporters at the White House he has "a list of three people" he will consider for the job this weekend. The Republican president blamed unflattering news coverage for Ratcliffe`s decision to bow out and instead remain in the House. Ratcliffe, 53, faced a potentially difficult Senate confirmation process.

The vacancy comes as the U.S. intelligence community grapples with an array of challenges, including the threat of foreign interference in next year`s U.S. elections, the impact of a rising China, escalating tensions with Iran, North Korea`s nuclear programme and the desire to end years of conflict in Afghanistan, Iraq and Syria.

Trump announced last Sunday that Coats, who had clashed with him over-assessments involving Russia, Iran and North Korea, will step down on August 15. Ratcliffe, a Trump loyalist and the most junior member of the House Intelligence Committee, had been tapped, but not formally nominated, to replace Coats.

"Rather than going through months of slander and libel, I explained to John how miserable it would be for him and his family to deal with these people," Trump said on Twitter. "John has therefore decided to stay in Congress."

The change in leadership at the top of the U.S. intelligence community comes after a half-year of turmoil atop the Pentagon. The Senate on July 23 confirmed Army Secretary Mark Esper as defence secretary, ending the longest period that the Pentagon had been without a permanent top official, a stint that began after James Mattis resigned in December over policy differences with Trump.

Trump`s previous pick for defence secretary, Patrick Shanahan, withdrew in June after reports of domestic violence in his family. The post of director of national intelligence was created after the Sept. 11, 2001, attacks on the United States. Ratcliffe, confirming he had withdrawn from consideration, said he thought the confirmation process would become a partisan battle between Republicans and Democrats.

"I do not wish for a national security and intelligence debate surrounding my confirmation, however untrue, to become a purely political and partisan issue," Ratcliffe said. Ratcliffe gained attention by defending Trump and criticizing former Special Counsel Robert Mueller during a July hearing on Mueller`s investigation into Russian interference in the 2016 U.S. election.

Although Ratcliffe had touted his counter-terrorism experience as a federal prosecutor in Texas, media outlets including Reuters reported on concerns that he may have exaggerated his achievements in the post. Democratic lawmakers and some former senior U.S. intelligence officers had said Ratcliffe lacked the expertise and experience to replace Coats. Some voiced concern that he would warp U.S. intelligence to support Trump`s views. Ratcliffe served for six months on the intelligence panel.

Trump said he might name the No. 2 intelligence official, Sue Gordon, as acting director of national intelligence. That is required when there is a vacancy in the top job. Such a move would likely be reassuring to many U.S. intelligence experts because of her deep experience.

However, some Trump allies, according to the source familiar with the matter, were floating the possibility of instead naming CIA Director Gina Haspel as acting director until a permanent director is confirmed by the Senate.

Senate Intelligence Committee Chairman Richard Burr said while he was "heartened" that the office of the director of national intelligence has an experienced team in place during the transition, "there is no substitute for having a Senate-confirmed director in place" leading it.

Senate Democratic Leader Chuck Schumer, a critic of Ratcliffe for the job, said in a statement, "The next Director of National Intelligence must be someone who is nonpartisan, sees the world objectively and speaks truth to power." Ratcliffe joined a growing list of Trump`s choices for senior jobs who have had to withdraw, leading to questions about the rigorousness of White House background checks.

Asked whether Ratcliffe`s history was inadequately reviewed before he was picked, Trump defended the White House process. While Trump regularly attacks the media, he told reporters, "You`re part of the vetting process. ... We save a lot of money that way."