Donald Trump tweets doctored picture of himself as Rocky Balboa, sparks up Twitter

US President Donald Trump, who is facing an impeachment inquiry, on Wednesday took to microblogging site Twitter and posted a picture of his face superimposed upon fictional boxer Rocky Balboa's bare-chested body, leaving the Twitterati amused. 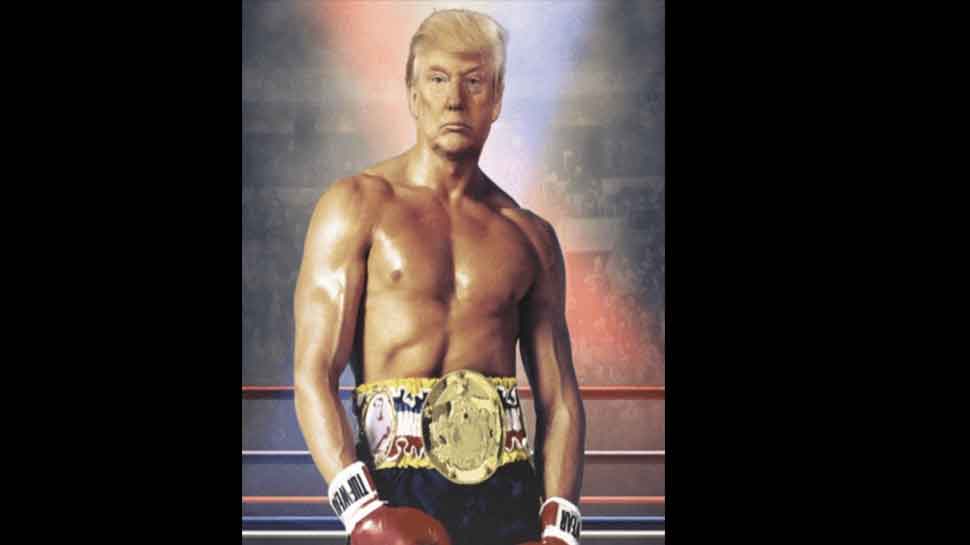 NEW DELHI: US President Donald Trump, who is facing an impeachment inquiry, on Wednesday took to microblogging site Twitter and posted a picture of his face superimposed upon fictional boxer Rocky Balboa's bare-chested body, leaving the Twitterati amused.

In the picture, which did not carry any caption along with it, the US President's face has been superimposed on the body of actor Sylvester Stallone who is shirtless and kitted out in boxing attire and played the character of a boxer in the movie 'Rocky'.

Trump is known to occasionally retweet the social media users who praise him or insert him into flattering images or videos. However, it is not clear as of yet where he got the photoshopped image of Rocky, and what the tweet is supposed to mean.

Seeing the picture, which has garnered over 4.5 lakh likes and 1.34 lakh retweets till now, users on social media were sent on a tizzy as in which Trump's supporters seemed to applaud his photoshopped picture while his critics had something else to say.

"The delusion runs very deep," one user tweeted in response to the photo. "Delusion vs. Reality," wrote another user, with side-by-side images of the doctored photo and an image of Trump on the golf course.

The reality sucks though. pic.twitter.com/AyYhTunPmH

Trump's supporters had a different take on the photo tweeted by him. "True champion!" a Trump supporter wrote. "Only the truly stupid punch President Trump and don't expect a counterpunch."

Only the truly stupid punch President Trump and don't expect a counterpunch.

He's taken on dynasties, the swamp & the world...

HE IS STILL STANDING!

I stand in support of TRUMP!

Trump has tweeted doctored photos and videos in the past, usually when the image depicts him as a hero or his opponents as villains.

Earlier on Tuesday, Trump had dismissed reports that he suffered "a massive, unbelievable heart attack." He joked that doctors, who examined him at Walter Reed Medical Center in Bethesda, Maryland, had asked him to "take off your shirt, sir, and show us that gorgeous chest," The Hill reported.

The House of Representatives is currently conducting an impeachment inquiry ver the president's alleged pressure campaign with Ukraine. Trump is accused of freezing nearly US$400 million in military aid to Ukraine while pushing the country's president, Volodymyr Zelenskiy, to announce an investigation into Trump's domestic political rival, Joe Biden.

Trump has condemned the investigation while blocking his aides from testifying and denounced the whole process as a "sham" and a "witch hunt." He has also insisted that his actions were justified by a widely discredited conspiracy theory that Ukraine was trying to sabotage Trump in the 2016 election.