Three months of anti-government protests have thrown Hong Kong into its deepest crisis in decades, pounding the financial hub`s economy and stock market and adding to its Sino-US trade war woes. 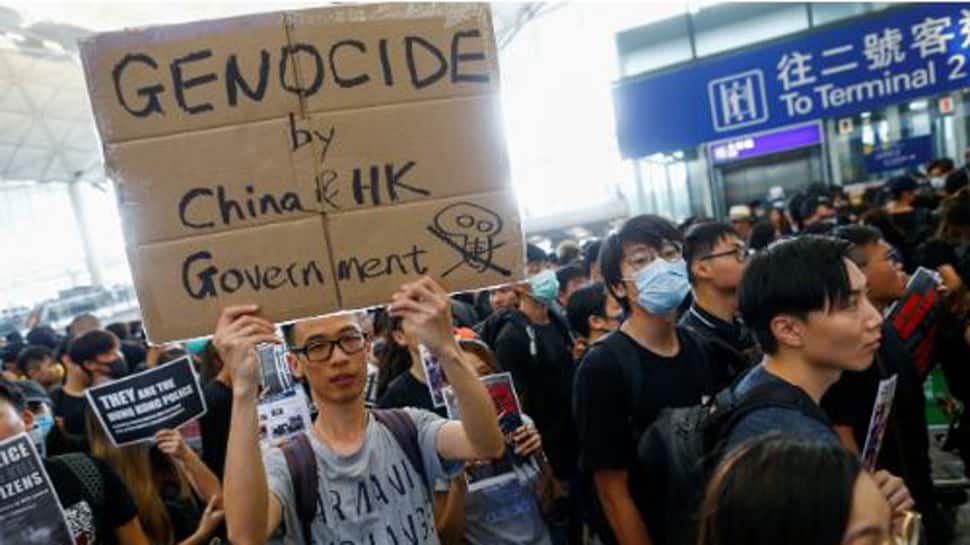 HONG KONG: Three months of anti-government protests have thrown Hong Kong into its deepest crisis in decades, pounding the financial hub`s economy and stock market and adding to its Sino-US trade war woes.

The Hong Kong dollar is pegged in a narrow band around HK$7.8 per US dollar, but has for weeks languished at the weak end as unrest has deepened, shedding 0.8% since early July.
Bets in the market suggest some think the peg could falter. Can the Hong Kong dollar withstand the selling pressure?

WHY IS THE HONG KONG DOLLAR WEAKENING?

The entrepot city is facing its first recession in a decade, shaken by slowing Chinese growth, trade-war tensions and the increasingly violent protests. The forwards market suggests speculative bets on the peg breaking are building.

Twelve-month forwards recently traded outside the currency`s range. Spreads in option markets have spiked to their widest in three years this month, in favour of dollar calls, suggesting investors are paying a high premium to bet on the Hong Kong dollar`s drop.

"Forward is telling you that some people expect the Hong Kong dollar to move out of the band," said Alicia Garcia Herrero, Natixis` chief economist for Asia Pacific. This was particularly unusual because it occurs while Hong Kong`s interbank borrowing costs are surging above US dollar rates, she said, something that would tend to support the currency by making it unattractive to short.

IS THE PEG GOING TO POP?

Probably not. The peg has proven resilient since it was conceived in 1983 to support the then-British territory`s currency against uncertainty over its handover to China. The Hong Kong Monetary Authority (HKMA), the city`s de-facto central bank, buys local dollars if it gets too weak and sells to curb excessive strength.

It has plenty of firepower, with $448.5 billion of assets in its foreign exchange fund alone as of July, representing roughly seven times the currency in circulation, according to HKMA.
The peg has already survived every kind of speculative attack, including from famed short-seller George Soros during the 1997-98 Asian financial crisis, plus external shocks from the 2008 global financial crisis to China`s stock market plunge in 2015.

"It always ends the same way – the HKD peg stands tall and the speculators get burned," BNP Paribas Asset Management senior economist Chi Lo said in a note in May.

IS ANYTHING DIFFERENT THIS TIME?

Yes. The situation is an unprecedented triple threat: A global slowdown, a trade war and domestic turmoil. Protests that began in opposition to a now-suspended extradition bill that would have allowed people to be sent to the mainland for trial - have swelled to include demands for greater democracy that are anathema to China`s leaders. Beijing has deployed paramilitary troops near the border with Hong Kong.

"If mainland China police forces go into Hong Kong, then all bets are off," since investors` trust would be shattered, Brown Brothers Harriman`s (BBH) analysts said in a note this month.

To be sure, it is a doomsday scenario the bank rates as unlikely. But anecdotally, investors are already scrambling to get money out, with property agents reporting spikes in interest from Hong Kongers in real estate in Malaysia, New Zealand and Australia.

Moreover, China`s yuan has also slumped to an 11-year low, weighing on emerging market currencies and the Hong Kong dollar.

Cash in Hong Kong has tightened, with liquidity levels falling 87% from a 2015 peak - largely because interest rates went up elsewhere in this period, drawing capital away. HKMA can release more cash at any point by tweaking its issuance of bills and notes, which are mostly held by banks. That, however, hasn`t dissuaded currency bears to take aim at the Hong Kong dollar.

Hong Kong`s `currency board` peg, however, is vastly different from Argentina`s, which was abandoned in 2002.

Unlike the troubled Latin American economy, Hong Kong has not breached the core principle of the currency board by financing budget deficits with foreign reserves, according to BBH.